Singin’ in the Rain comes to the Bord Gáis Engery Theatre 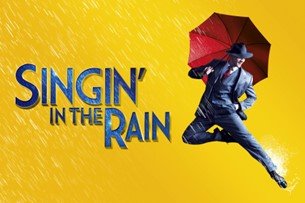 The most marvellous musical of all time, based on the classic Metro-Goldwyn-Mayer film starring Gene Kelly, Donald O’Connor, and Debbie Reynolds, will have a one week run from Tuesday 31st of May until Saturday 4th of June 2022.

Tickets priced from €21.00 go on sale through Ticketmaster on Friday 4th February 2022.

This new acclaimed production of Singin’ in the Rain opened at Chichester Festival Theatre and extended due to unprecedented public demand, before a transfer to London which received huge critical acclaim and four Olivier Award nominations! Full casting is yet to be announced.

Since then, Singin In The Rain has played to more than 750,000 people…. some leaving the theatre a little wetter than when they arrived! In fact, did you know, the iconic rain scenes:

Singin’ in the Rain features songs by Nacio Herb Brown and Arthur Freed, including Make ‘em Laugh, Good Morning, Moses Supposes and Singin’ in the Rain. Original screenplay and adaptations are by Betty Comden and Adolph Green. Reuniting the original Chichester production team, Singin’ in the Rain will be directed by Jonathan Church, with Olivier Award-nominated choreography by Andrew Wright. The production is designed by Simon Higlett, with lighting by Tim Mitchell. Stuart Burt is Casting Director.

The stage production of Singin’ in the Rain is based on the classic Metro-Goldwyn-Mayer film, regularly voted the most popular film musical of all time.

Tickets are on sale now!

Win a Luke Kelly artwork – while supporting the prevention of suicide

Dublin mum’s ‘incredible’ recovery from stroke she mistook for hangover