A masterful take on the legendary evacuation

IT’S CLOSE to two decades since Christopher Nolan’s debut, Following, and in the years since the director’s career has been spent playing with time and space and messing with the conventions of storytelling in mainstream cinema.

He’s reinvented Batman and brought us two epics of hard-science fiction. With Dunkirk (Cert 12A, 105mins), Nolan delves into the annals of history and delivers a war film that will forever stand alongside the genre’s greats.

For those not versed in the history behind the film, Dunkirk takes place on and around the beaches of the titular town in May, 1940.

The German army has cut off the Allied troops from France, surrounding them on all fronts. With limited air and ground cover, an evacuation of several hundred thousand troops is attempted.

Nolan arranges his war epic like a delicately woven tapestry. We follow a number of narrative strands, taking place on land, on sea and in the air – much like in the rhetoric of Winston Churchill’s famous speech.

The structure itself takes the form of a sort of palindrome, with three separate timelines that eventually meet in the middle – one on land a week before the final evacuation, another a day before it following the journey across the channel, and also events in the air above the chaos. 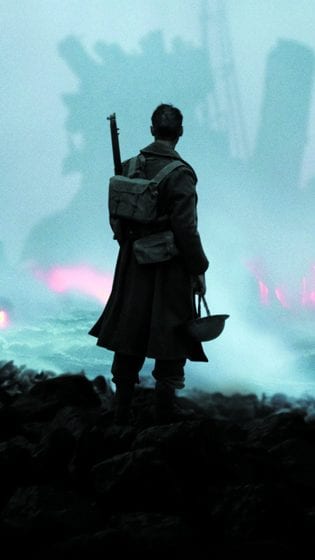 Evacuation
Newcomer Fionn Whitehead escapes fire on the streets of Dunkirk and makes it to the beach, where he teams up with Gibson, another young private, and the pair try to make their way aboard an evacuation vessel.

Mr Dawson (a very welcome turn from Mark Rylance) takes his boat across the sea with his son Peter and a teenage hand, George (Barry Keoghan).

On their way to Dunkirk, they rescue a shell-shocked soldier (Cillian Murphy) who urges them to turn around back to England.

Finally, in the air, three Spitfire pilots fly across the English Channel – another performance from behind a mask for Tom Hardy following his turn as Bane in the final part of Nolan’s Batman trilogy.

These are some of Dunkirk’s most exhilarating sequences, engaging the audience while rarely leaving the space or sounds of the cockpit.

As these separate narrative lines grind toward the climax like cogs in a machine, they synchronise with a powerful catharsis; an immensely satisfying conclusion and a successfully payoff for what is a considerable narrative experiment for a mainstream war film.

Dunkirk delivers deeply human emotion; a remarkable and truly admirable feat for a film with little or no dialogue.

The men portrayed on screen struggle with notions of bravery and honour; the very notion of evacuation betrays the sense of duty at the heart of all war propaganda.

Composer and frequent Nolan collaborator Hans Zimmer’s score melds the ticking of a clock with the grinding of machinery as the film counts down toward its ultimate climax.
The horizon is always visible in Dunkirk – whether it represents the safety of home, or the doom of the beaches. The enemy’s face is never seen, and is all the more terrifying for it.
With practical effects and an enormous cast of extras, Dunkirk evokes the scope of classics of the genre, creating a sweeping epic that’s yet neatly packaged into an hour and forty-five minutes.

You’re unlikely to feel emotion as intensely in any other movie this year – certainly any war movie.

Dunkirk stands as Nolan’s best – it’s a remarkable achievement in visceral, historical storytelling and a sure contender for next year’s award season.
Verdict: 10/10

George Murphy: Dubliner is switching to his own...

John Craigie: Storytelling through songs and tales with...

Soulé: Balbriggan native shooting for the stars in...

Six of the best acts and gigs to...

Two great nights of music at the...

Celebrating all that is unique about Dublin

15/06/2017
We use cookies to ensure that we give you the best experience on our website. If you continue to use this site we will assume that you are happy with it.Ok