The Cannes Film Festival has once again attracted the cream of the crop of the cinema world to the sun-kissed southern French town – as well as all kinds of dealmakers and wannabes hoping to also clinch a dream deal by the time it all wraps up this Saturday, May 19.

While Dublin Gazette’s travel fund doesn’t quite stretch to joining in – more can’t go than Cannes – I know someone who’s there at the moment with a film production company, networking and doing the rounds in search of new deals.

I interviewed Antonio Ho (pictured) – a lawyer who’s part of a Hong Kong-based production company, 72 Dragons – for his insights into Cannes 2018, following his insight into Cannes 2017 in Dublin Gazette last year.
WHAT are you personally doing there with 70 Dragons? 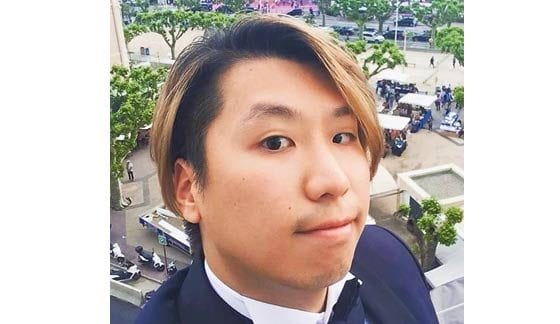 I’m here again working on the legal side of things; we’re trying to build global relationships, and have people in many cities around the world.
One of our main goals of the company is to connect with young filmmakers to help them create their projects.

The old, traditional, years-long path to making your early work is gone now, thanks to technology.
If you look at the modern way of doing things you still have to look to financing, distribution and so on, but it shouldn’t take so long to put your film together.

One of the things we do is to connect like-minded people together, which I think is a really good thing to help make your project work.
Some of the recent changes in, for example, the EU regarding personal data and data flow, also has been a huge topic in Cannes and filmmaking, considering how data flows around the world. After all, filmmakers also have to be aware of being data-compliant, too.
How does Cannes 2018 compare to 2017?

It’s always been business-orientated in Cannes, but while last year was very much about glitz and glamour, I think this year has been very strict on [focusing on] business. Even things like taking selfies on the red carpet have been frowned on, this year!

One of the other things that’s stood out is that there’re notably more women here this year – a lot more stars, directors and industry figures.
Does Cannes seem more European-focused this year, or has it drawn a different crowd?
I think it’s more European this year, but also has a stronger Middle Eastern feeling. I think that slight change is definitely down to accessibility, and also there’s a lot of money to be made at Cannes.

Also, China has a notably bigger presence here this year; they’re trying to introduce some of the young, fresh Chinese talents to the [Western] markets.
Do you think Cannes is trying to align a bit more with China, or with other emerging markets?
I think it’s a bit of both; Western studios and filmmakers are reaching out now, but China is also trying to promote its talents, too, on the international stage.

There are a lot of Chinese talents, but many of them are getting older – they’re 60, 70 now – and people are wondering who’s coming up next.
Apart from that possible audience shift, is there much sign of Cannes adjusting for the rise in digital media, such as streaming content?

Yes, definitely. For example, VR [virtual reality] is getting bigger; there’s a definite increased focus on VR content at Cannes this year, such as on VR experiences or media.
I think there’s an adjustment under way here to include that newer media – personally, I think it’s been a slow process to adapt, because there’s still a strong ‘traditional’ expectation of what cinema or media content is, or ‘should’ be.
What else seems different about Cannes this year?

I thought last year the focus was very much on selling, and on sellers looking for buyers, but this year it’s very much the other way around, with people who want to find projects.
Also this year, there seem to be a lot more fimmaking grants available, from governments or independent creative bodies or organisations.

That aspect’s getting bigger – that pool of talent really needs financial help, so there seems to be more support for them.
Correspondingly, there’s a strong need for lawyers and legal awareness at Cannes, particularly related to funding.

It’s a little ironic that the more funding and support there is at Cannes to help people be more creative, the more you need lawyers and laws, too, to make all that work!
While Cannes, for most, means glamour and glitz, how important is all the ‘back room’ stuff?

It’s probably a 50:50 split in reality between business and pleasure, but I think what most people see of Cannes is an 80% that’s all the style and celebrity.
At the end of the day though, Cannes is like a big machine – you need every part to make it work. Just because the public don’t see ‘the bolts’, that side – the business aspect – is what holds it all together.

Lastly, what’s been the best part about Cannes for you?
The red carpet! I think it’s pretty much everyone’s dream to walk the red carpet somewhere; whether you’re working in the industry, or love cinema, or are a starchaser, everyone wants that red carpet experience, and you definitely get that in Cannes.

Apart from being so busy here, probably the worst part for everyone at Cannes is the infrastructure with so many old buildings around. There’s a feeling that the IT and tech support isn’t what it should be – yet.

The Goldfinch: A powerful on-screen portrayal of Prize...

Monkeying about proves plenty of fun

A rollercoaster of emotions you’ll love

30/07/2015
We use cookies to ensure that we give you the best experience on our website. If you continue to use this site we will assume that you are happy with it.Ok