The annual St Patrick’s Festival is set to pack a punch this year, with thousands of talented home-grown and international performers coming together to celebrate Ireland’s patron saint.

Themed around ‘home’, there will be five days and nights of events, kicking off on March 15th. Over 30 events will see a cultural celebration of Ireland and it’s people.

Fáilte Ireland CEO Paul Kelly said: “This year’s St Patrick’s Festival promises again to provide a big, bold and colourful showcase that not only attracts tens of thousands of international visitors for the festival weekend itself but also showcases Ireland as a tourist destination to global media.

Fáilte Ireland will be hosting a number of key international media during the event – ensuring that all the activity and excitement is captured and shared with as big a global audience as possible.” 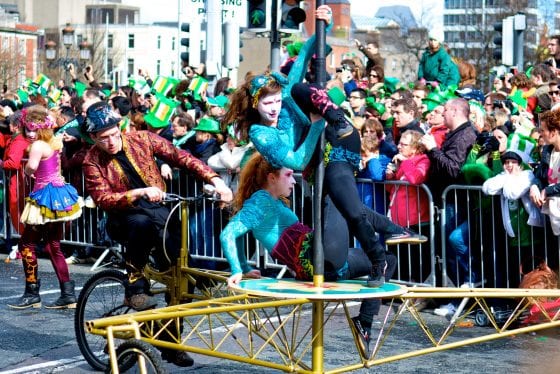 On March 15th, there will be a screening of The Four Horsemen of the Apocalypse for fans of old Hollywood in St Patrick’s Cathedral. Directed by Irishman Rex Ingram, the screening will see a live performance of a new score to the film by composers Matthew Nolan and Barry Adamson, accompanied by Adrian Crowley, Kevin Murphy and Sean MacErlaine.

The festival will see the world’s largest collection of Famine-related art on display at Dublin Castle also, as Coming Home: Art and the Great Hunger Exhibition will be displayed, also on March 15th. Enjoy a tour of the exhibition followed by an artist’s panel discussion featuring artists Rowan Gillespie, Robert Ballagh, Brian Maguire and Geraldine O’Reilly whose work is featured in the collection.

Experimental folk-rock band The Spook of the Thirteenth Lock will expand to an 18-piece guitar orchestra to launch their new album, Lockout, in the Pepper Canister Church on March 16th. An acclaimed production of Samuel Beckett’s ‘Waiting for Godot’ will also come to the historic Daisy Market on March 17th for a one-off outdoor performance.

The highlight of the celebrations, the St Patrick’s Day Festival Parade, will kick off 12 noon on March 17th, St Patrick’s Day itself. It will weave its way through the heart of the capital city in ‘a flourish of colour and flair’, with Grand Marshall Liam Cunningham leading the way, as well as guest of honour Mark Hamill making an appearance. Groups from all over Ireland and the world will come together to celebrate the parade theme Home Is Where the Heart Is through a variety of performances and street theatre. 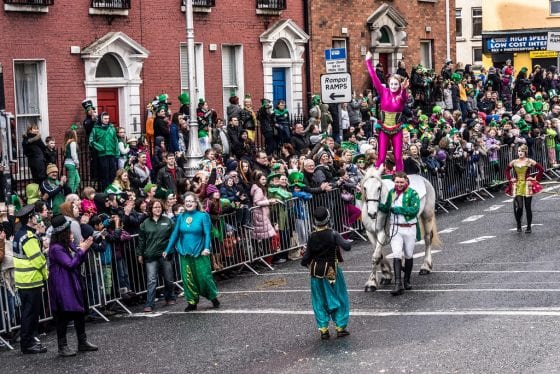 There will be a screening of ‘Pathways: Irish Routes to the Art of the Matter’ by film maker Donal Dineen, a film about Irish creatives succeeding abroad. It will be screened as part of ‘Where We Live’, presented by THISISPOPBABY in the Complex in Smithfield on March 18th. ‘Where We Live’ is a mix of music events, live art and theatre productions detailing what it feels like to live in Dublin, and Ireland, today.

Another event specifically commissioned for the festival is ‘Kormac: Equivalent Exchange’. Taking place in Vicar Street on March 18th, it is a collaborative concert with DJ and producer Kormac. He will perform with the Irish Chamber Orchestra, Kormac’s Big Band and an array of 30 musicians and artists including Jack O’Rourke, Loah and Eimear Noone. Well known urban artist Maser will also produce visuals for the show.

A street carnival will liven up Merrion Square on March 18th for Big Day Out, a day set to be ‘bursting’ with music, street theatre and workshops. There will be life sized arcade games to enjoy too, with the experience truly being for the whole family.

A look ahead to Cuala’s big final and your chance to WIN tickets! #NOWCLOSED

MetroLink must not be scrapped

Fundraiser attracts 1,000 in Liverpool for Sean...

14/03/2019
We use cookies to ensure that we give you the best experience on our website. If you continue to use this site we will assume that you are happy with it.Ok