Having put a focus on obtaining a really musically talented cast, brought the simpler elements of the story to the fore and utilised a clever set extremely well, the latest incarnation of Once –showing at the Olympia Theatre until late August – is astoundingly well done.
Adapting Glen Hansard and Marketa Irglova’s music and taking much that is good from the 2007 movie, the musical is set entirely in a surround with the feel of an old-school Irish pub, the fluid cast almost constantly on stage in their entirety as they perform the backing track to a gentle tale.
Niamh Perry, playing ‘Girl’, is the undoubted star.
Credit has to be given for her convincing and unwavering switch into a Czech accent, but what really stands out are her vocals, and the restrained tension she creates around the lead man, Brian Gilligan.
While the pre-interval part of the show is relatively light-hearted, full of local colour and witty patter, things take an intense turn after the interval, with the emotional love story at the heart of the tale coming to the fore to glorious effect. 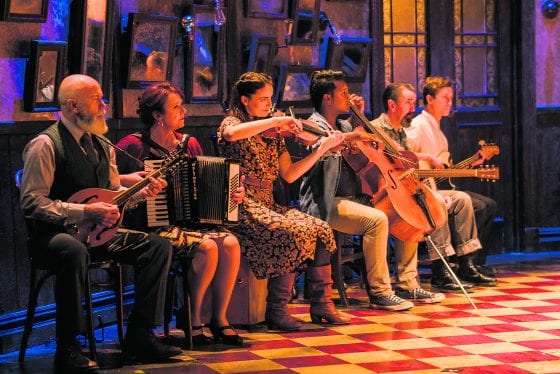 The stage comes to life to suit, too, and there’s an impressive array of character development, in the narrow but entertaining lives of Girl’s Czech housemates, the occasional but memorable appearances of her daughter, and Phelim Drew’s wacky interludes as music store owner Billy – a lively stereotype of the witty North Dubliner.
Then there are the gimmicks. The best come in the pre-show, pub-style performance from the cast, which takes place with the audience on stage and able to buy from the bar positioned as part of the scenery.
It works well, too, but the key here is in the simplicity and the casting. Perry is outstanding all round.
Gilligan has a solid voice and his character constantly seems on the verge of a nervous breakdown, while the extras have a smart dynamic, adding to the humour.
All in, Once is a wonderfully produced package, with ample entertainment value that also tugs firmly on the heartstrings, with the relationships thoroughly believable.
The emotion in Perry as she bowed before an opening night audience said it all: this might be just another step on the road this musical has been powering down over the last few years, but it is also something very special.

Launch of Splatoon 2 is coming to a Gamestop near you

James Hendicott: If you’re reading this, you made...

Rory and the Island: “We’re just hanging in...

Trad to the bone

09/03/2020
We use cookies to ensure that we give you the best experience on our website. If you continue to use this site we will assume that you are happy with it.Ok