John B. Keane’s “The Matchmaker” returns to the Gaiety Theatre 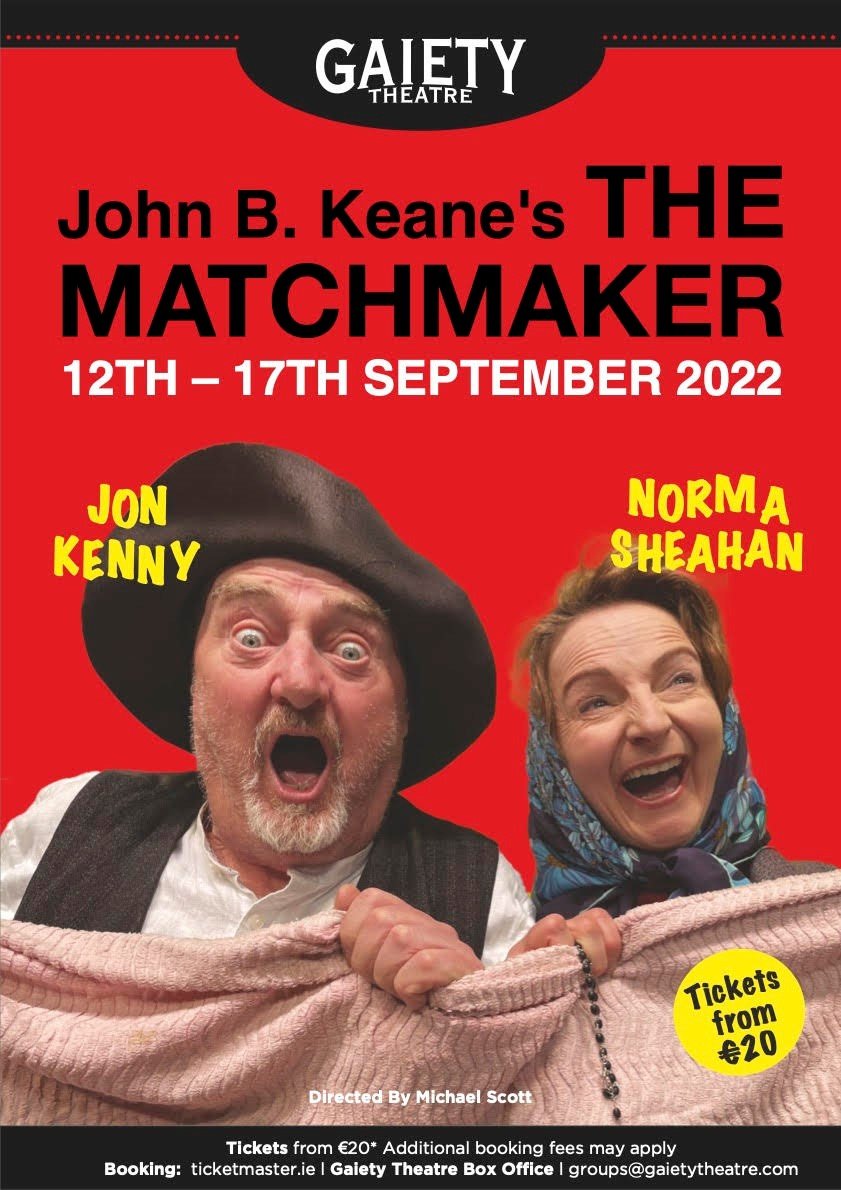 Now for its 21st year, Michael Scott’s iconic production of JOHN B.KEANES hilarious and dramatic comedy THE MATCHMAKER is coming to the Gaiety Theatre from 12- 17 September 2022 (with two matinees).

Starring one of Ireland leading dramatic actresses NORMA SHEAHAN whojoins JON KENNY (who was part of the Irish comic duo d’Unbelievables with Pat Shortt) in this iconic production for one week. Together they play a myriad of characters in this hilarious and earthy dramatic comedy.

Tickets from €20 including booking fee are on sale now from ticketmaster.ie.

THE MATCHMAKER  opened in Spirit in January 2001 starring Anna Managhan and Des Keogh. The Production went on to tour Ireland, sell-out at the Edinburgh Festival, become  a Video and DVD  with Sony, a BBC Radio Series, and play ‘off Broadway’.

Many of Ireland’s leading actors have taken over the over the years,  including, Geraldine Plunkett, Des Nealon, Ann Charleston (Madge in Neighbours), Mary Mc Evoy (BIDDY IN GLENROE) and the late Mick Lally one of our most loved actors.

The play follows the efforts of Dicky Mick Dicky O Connor to make matches for the lonely and lovelorn. Using his inimitable way with words and his one sense of “devilment” and wit, Keane delves into the longings, hungers, fears and foibles of this collection of lonely county people and creates a marvelously colorful world, taking us back to a simpler time, when phones were few and far between and the only web was one left behind by spiders.

Norma Sheahan loved by audiences from her roles in The Clinic, Bridget and Eamonn and Moone Boy, is the only other actress with Vanessa Redgrave to have sold the Gaiety Theatre in a one one woman show (not once, but twice) in her role as Willy Russell’s Shirley Valentine. Shirley Valentine has just completed an enormously successful national tour.

The production is directed by Michael Scott by arrangement with Mercier Press.

‘King/Queen of the Court’ volleyball event hosted at Balbriggan