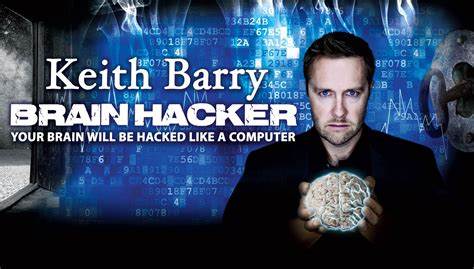 We’re two questions in when Keith throws a question back at me – think of a number, any number – and correctly predicts my (perhaps too conventional) choice of 13 on the back of a card that hasn’t, at any point since he asked the question, moved from view.

I’m not sure how he’s achieved it, and truthfully, I’m a little flustered, but as the interview progresses, it’s clear that Barry is used to this kind of reaction, and the performer, whose skills range from hypnotism to sports psychology, is quick to take the batten and run with it.

“I actually quite like sceptics. I invite them up onstage,” he laughs, when I ask about cynicism around his act. “What I have changed is I used to fire foam rockets into the audience and invite people up at random. I stopped doing that as it would quite often hold up the show as people didn’t want to come up. So people can just sit back and relax, or come up, whatever you want. I’m mindful of that. About 70% of the audience want to be active participants.”

There’s a deeper side to Barry’s work, of course, and it runs largely in the way he uses his skills off the stage.

“I’ve been fascinated by the mind since I was 14. I got my first book on hypnosis then, called Practical Hypnotism, by E. Wolff, and I qualified in my early 20s. I started reading psychology books in my early 20s, too. I’m not sure people realise that I’ve been a mind coach or an executive coach for that long. Some of that has come to light in recent years, like my work with Rory Best. There are many famous sportsmen and women in Ireland I work with, butI’m required to keep that work confidential.”

“I’d been doing magic and mentalism for a long time, then when I was down in Australia someone said I was a ‘brain hacker’. I started using that term, as it’s very hard to come up with a unique phrase. I quite like the term as it encompasses everything I do. I hack brains for entertainment, but also my work as a life coach.”

For the shows, though, it can be more complex. “It’s still difficult to explain to people what they’re coming to see,” he says. “I’m a bit of a chameleon, I’ll change my output. Not long ago I did mainly magic and escapology. More recently I’ve moved on to the head and the brain. Some people are somewhat confused about what I am, and it can be difficult.”

“Maybe I should specialise in just one thing. But I don’t want to do that. I want multiple outlets to follow, which is why I do hypnosis and magic, and so on. I may not ever master any of them, but you can become very good if you put in the hours. It’s all about the hours, but I love what I do. I put in 18 hours a day. And I do mean 18 hours. If you outwork the competition, you always win.”

Keith Barry brings his ‘Reconnected’ show to the Olympia Theatre on May 28th.