A festival for us all

IN WHAT is his last year as artistic director of the Dublin Fringe Festival, The Gazette sat down with Kris Nelson to discuss this year’s performances.
“I’m so excited – the building is absolutely buzzing! It’s a wild time.” Kris said, ahead of the opening day of this year’s festival. 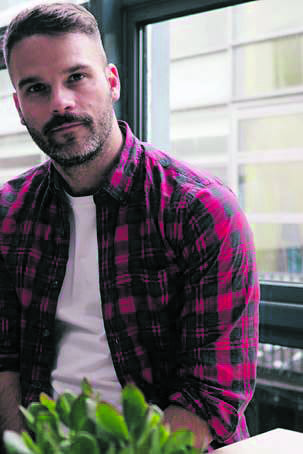 Originally from Canada, Kris first led the Fringe as artistic director in 2013 and while he says he has loved his time in Dublin, this year’s festival is a bittersweet affair as it’s his last.
“I’m in festival mode so I’m just very excited about bringing the festival to life. I have had a few moments and a few twinges [about leaving], but I’m trying to keep them at bay.”
He will next take up the position of artistic director of London contemporary theatre festival, Lift.
As for this year’s Dublin Fringe, Kris praised the programme of artists and performances. “This year’s programme is the biggest we’ve had in a while, with 80 different shows in 33 different venues.”
This year will also see many outdoor and public events taking place across the city. “These shows will bring really interesting propositions to public spaces,” Kris said.
One such outdoor event is Trophy. Comprising a cluster of tents at Barnardo Square, beside City Hall, each tent is a person who tells a true story of a moment in their life when everything changed. It’s described as a living monument to the experiences that make up our lives and a conversation about change.
Of the other highlights, Kris says: “The festival is for new work, new voices and new kinds of experiences. We take audiences everywhere – there’s a show about the GAA called Spliced; there’s a circus called Raven Eyed, in an old warehouse; there’s Soldier Still, about violence and post-traumatic stress disorder.
“Another piece which I think is really fun is Neon Western – it’s a rave, but also a spaghetti western, it’s got amazing music and that’s happening in the Samuel Beckett theatre. It’s a really wild and really visual and exciting show.”
With so many things to see and experience at this year’s Fringe, Kris recommends just showing up at venues and seeing what’s on at any given time. “A lot of people just rock up to the festival. They go to Smock Alley or the Project Arts Centre and they just say ‘What’s on?’ and that’s a really great way to take in Fringe.”
He also recommends simply calling up the box office and having a chat to find out what shows you’ll enjoy most. “Our box office team will guide you and find out exactly what you want to see.”
The Fringe is running until September 24; for the full listings, see www.fringefest.com.

It’s All-Ireland final No.75 for Sean .. once he scores a ticket

‘Heartbreak at every corner, on every street’

Balbriggan now one of smartest towns in Dublin

30 years and counting for hilarious June...

Bringing The Dead to operatic life

31/05/2018
We use cookies to ensure that we give you the best experience on our website. If you continue to use this site we will assume that you are happy with it.Ok