Having just returned from five years living in Beverly Hills, Claudine Keane says she is happy to be back where the craic is – Dublin!
“It’s lovely to be back, and on a sunny day like this, Ireland is the most beautiful place ever.”
Speaking to The Gazette at the launch of SPAR’s summer advertising campaign, the mum-of-two opened up about her supporting her husband Robbie Keane’s football career moves, and said she is up for the next adventure, wherever that may take them.
“I loved LA, but I love being back in Dublin, it’s a nice balance,” she said. “It’s great to see my family, spend some time here and let the kids see what it’s like in Ireland.”
The couple’s two children, Robert Jr and baby Hudson, have spent most of their lives in LA until now, but Claudine says she is “impressed” at Robert’s ability to adapt between the two countries.
She said: “He’s very adaptive – I’ve really realised that in the last few weeks and I’m very impressed by the fact that he can go between one and the other without too much stress or strain, which is fantastic because it was something I was worried about.”
Robert Jr went to school in LA until last December, but has had no problem slotting back in here. 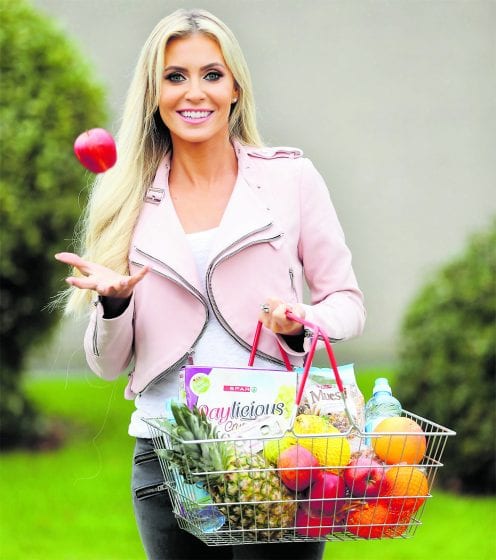 As for herself, and for many other Dubliners adjusting to life back home after living abroad, settling in has largely gone okay for Claudine, though not without a few bumps.
She said: “Rob finished up with LA Galaxy in December and since then we’ve been travelling a lot, and back and forward between here and LA, so I haven’t really had a huge transition period yet – but it is a big deal to take your child out of school and send them to a new one.
“As a mam, you’re always worrying about them settling in, and making sure that it’s not traumatic in any way.
“The fact that I’ve been able to spend more than two weeks at a time here has been really fantastic for me.”
One of the best parts about being back, said Claudine, is that her family have been able to spend time with Hudson and be a part of milestones, like seeing his first steps.
“All those little things, they get to see him and see his character – it’s not just me telling them over the phone, they get to be part of his little experiences.”
While she loved life in LA, the Malahide native said that nowhere compares to Dublin when it comes to socialising and having craic.
She said: “I have to say, Dublin is great craic, Ireland too! I did miss that a lot – people socialise very differently in America; you’d miss the sing-song and banter we have here.
“We have our own humour here, we’re very light-hearted, and I missed that sense of Irishness.”
While abroad, Claudine also missed how Irish people love to dress up. “I can honestly vouch for that – nobody gets dressed up [in America]!
“It was funny – when I came home, I had to readjust. I was asking my friends if people still wear dresses out, because everyone just wears jeans over there. I find it much more glam here,” she joked.
The thing she missed the least about Dublin, however, was the weather – of course.
“It’s insane the amount of outdoor and sporty activities you can do in LA,” she continued. “The beach life, eating outdoors, making plans and knowing that the weather is going to be good.
“We could even go to the beach around Christmastime, so I will definitely miss that.”
At the moment, Claudine is the face of SPAR’s Better Choices campaign, and she praised the healthy options on offer in stores at the moment.
She said: “It’s perfect for our family because we’re always on the go – they’ve made it so simple and easy to pick up something healthy.”

Jail for man who bit stranger “in an...

DOTW: Holly has her heart set on...

Designers named as finalists in the Dublin...

14/09/2017
We use cookies to ensure that we give you the best experience on our website. If you continue to use this site we will assume that you are happy with it.Ok