A lifetime in the making, the multiple sporting strands of Nicci Daly’s life reach an incredible crescendo this month.

On Saturday, she lines out against USA as part of the ground-breaking Irish hockey team that will play in their first World Cup for 16 years. It follows eight years – and over 150 caps – of graft, including two devastating Olympic qualifying campaigns.

Then, on August 18 and 18, along with Emma Dempsey, she will get behind the wheel of a racing car for the first time in earnest at Mondello Park at the Historical Racing Festival as part of the Formula Females Race against Cancer.

Her father Vivion was a celebrated figure in Irish motorsport before he passed away from cancer. Her uncle Derek drove in Formula One and so it will be very much in the family tradition when she hits the track in her 1.8L 160Bhp Rover 25 saloon in a “future classics” class.

They will be the only two women in the field of 20, adding to the challenge with all funds raised from the venture going to the Irish Cancer Society, making it a tumultuous month for the Dubliner after a lifetime around the sport.

“Since the day I was born, every Sunday I was at the race track with my family. My dad, the brothers and sisters, it was always a family affair.

“That was how I spent my weekends from when I was four until I was 13. My brother and I always pestered him to see if we could get more involved.

“I think if he was still around, we probably would have got into karting as his career was about to wind down, he would have enjoyed helping us out.”

But his passing ruled out that avenue. It meant she redirected her sporting passions in other directions to incredible effect but the fire still burned to do something in motorsport.

“It’s such an expensive sport, if you don’t have the finances and at the age we were, we didn’t have the experience to take it on ourselves. The opportunity never came around.

“In the last few years, it weighed heavy on my mind that I wanted to get back involved and that’s where the Formula Female thing came in.” 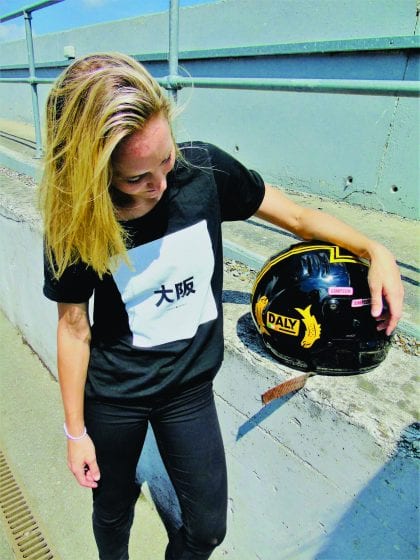 Dempsey was another who grew up around the paddock with her father, an arch rival of the Daly clan in their younger years and was “mad to get me into a car” and eventually it got the green light.

“I just asked ‘can we do this for the Irish Cancer Society and in memory of my dad?’ and it’s just taken off since there.”

Many of her father’s former sponsors and crew have come on board getting her to the brink of this moment.

First though, the full focus is on hockey and the World Cup. Again, it was not an obvious journey to this point. She was initially a Gaelic footballer primarily until she went to High School in Rathgar where she started to make representative teams.

A bout of shin splints, though, saw her put hockey on hold for three years before being coaxed back by the current Irish coach Graham Shaw to play with Tallaght club Glenanne in 2008.

It was pretty meteoric from there, getting a call into the Leinster Under-21s within six months and an invitation to the Irish senior team trials just a few month later in April 2009.
Big decisions arrived almost immediately, the tough nature of county or country showing itself when Dublin won their first All-Ireland ladies football title in 2011.

“I had only just got called into the Dublin senior team the same year I got into the Irish team. I had been with the Senior B team. There’s always that ‘ah, should I have stayed on?’ but then again would I have had my opportunity with the Irish team? You just don’t know. It was hard to take when they did win eventually but I chose hockey and it has been good ever since!”

There have been low points, most painfully missing out on the Rio Olympics by the width of a post in a shoot-out in Valencia.

But the side produced a series of superb results in 2017 to qualify for this week’s World Cup.

“It’s the biggest tournament we have played in, the first time since 2002.

“There’s hype around family and friends, it’s just something we have worked so hard for, been disappointed with not making the major tournaments. Getting there, feeling really good about it, I just can’t wait.”

Katie McCabe is hopeful Pauw stays on with...

Shamrock Rovers are one step away from a...

Lee takes over from legendary Loughran at Crumlin...

Gannon ambitious to kick on with Tennessee tennis...

Keeva and Katie Keen to pull off almighty...

O’Flanagan Dares to Believe once again as Tokyo...

11/04/2019
We use cookies to ensure that we give you the best experience on our website. If you continue to use this site we will assume that you are happy with it.Ok