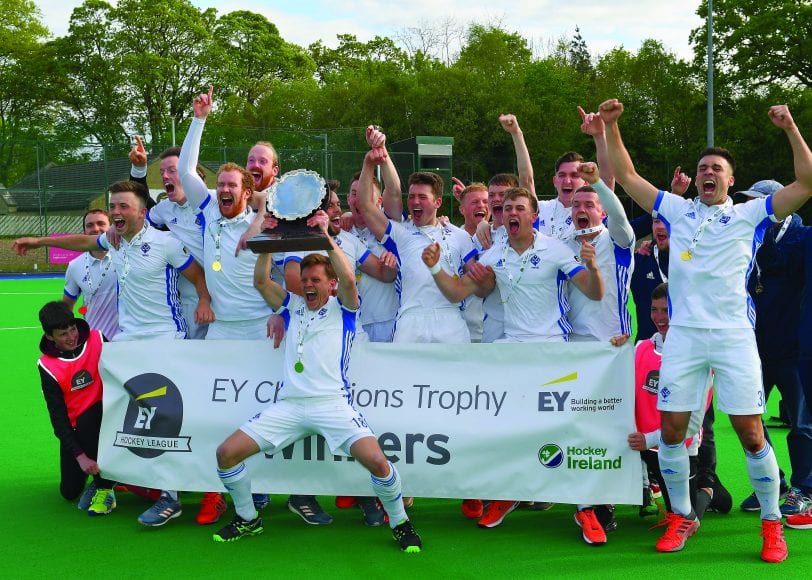 Across the Mills Cup, Neville Cup, Irish Senior Cup and Champions Trophy, they now have 28 successive wins in knock-out matches, en route to amassing 12 titles indoors and outdoors since 2017 with the chance to add one more next week.

“It was a scrappy performance but we came out on top [which is the main thing],” Three Rock coach Niall Denham said after his side became the first club to win out of province since the competition took on this format.

“We controlled it nicely; maybe we gave them a little bit too much space at times early on and did not stick exactly to the plan but the guys defended really hard. To get a clean sheet in the final, you give yourself a massive chance to win it.

“It’s the maturity in the side. A couple of years ago, we didn’t know our ceiling with these guys or how high we could go. It’s lovely to see what we can do, that we can control a game like that now which maybe we couldn’t a few years ago. That’s a great thing.”

Lisnagarvey had their chances with Luke Madeley – the Player of the Tournament winner – saved the second of those off the line. Troy Chambers fired in a shot that Carr saved into the stanchion outside the goal which some thought had nested into the top corner.

Rovers, hung tough during this spell and gradually began to put the brakes on their tempo with Daragh Walsh’s influence rising.

And when their corner chances started to come, Madeley delivered with a powerful flick in the 29th minute for a 1-0 half-time lead. James Milliken denied both Walsh and Mitch Darling from extending the lead but the killer blow came with 15 minutes to go.

Ben Walker got underneath a long overhead which Garvey were pinged for encroaching on. It gave him the space to run at the D and while he might have slipped the ball earlier, the ball broke in the tackle to John Mullins who swung first time to batter home.

From there, Garvey largely came up against a brick wall with Ravin Nair and Harry MacMahon making several key tackles while Carr cleaned up anything that got through.

Kevin Mullins had a third goal disallowed for a stick-shield before flicking over Milliken. Old hands Darling and Jody Hosking played out time and the top prize was theirs once more, bringing with it the number one European berth with Lisnagarvey taking the second seed for 2019/20.

The sides will meet again in a week’s time in the Irish Senior Cup final at Grange Road at 3.45pm on Saturday.

“It is a little surreal because the Champions Trophy is usually the end of the season but we will celebrate this and then dust ourselves down and focus on next week!” Denham added.