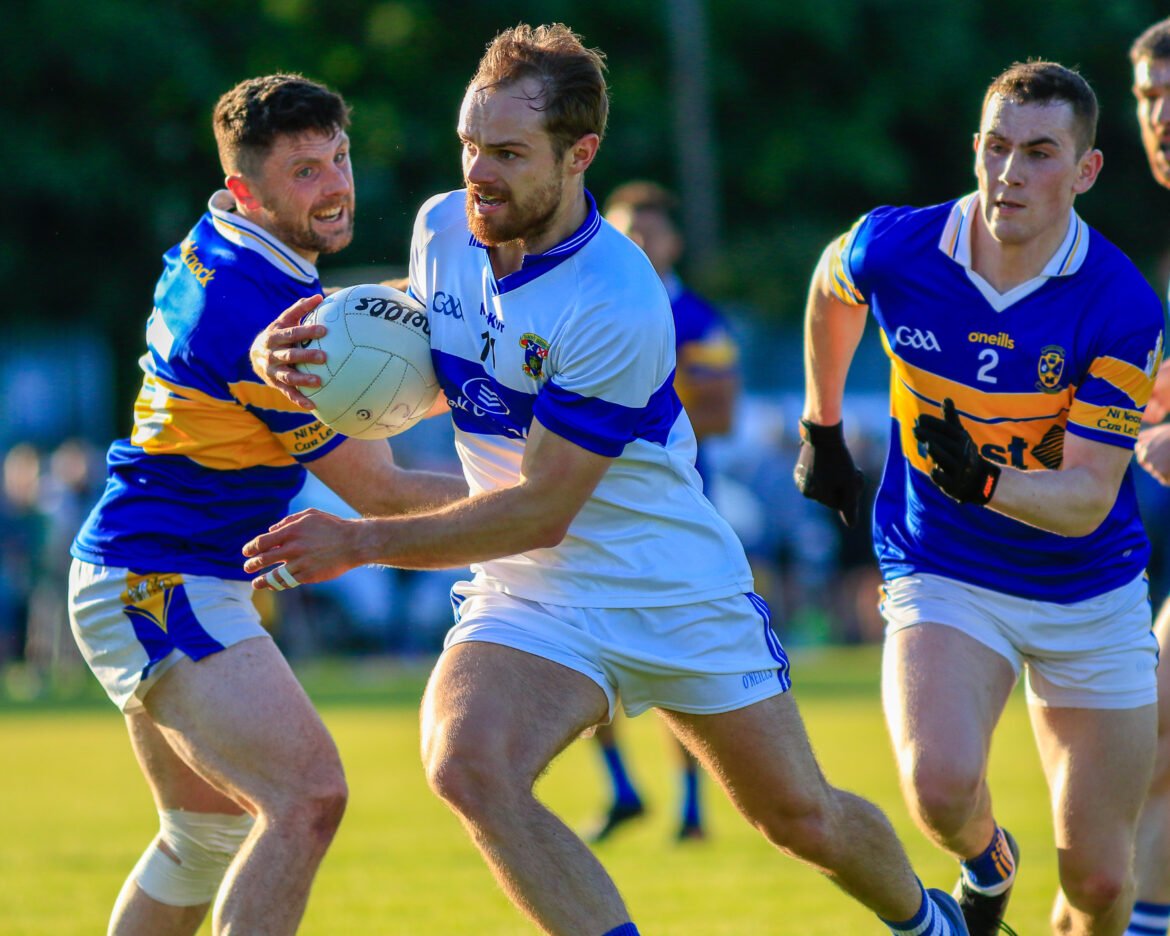 Skerries Harps made a return to winning ways in Division One of the Go Ahead Adult Football Leagues at Townparks, defeating Ballinteer St John’s on a final score of 2-12 to 0-12.

Following a 2-11 to 1-8 reversal at the hands of Na Fianna on May 21, Skerries entered this contest with their sights set on securing a fourth win.

They had already accounted for St Brigid’s, Cuala and Naomh Maur – as well as claiming draws with St Jude’s and Clontarf – but were somewhat hamstrung for the visit of Ballinteer.

Although St John’s had suffered narrow defeats to Castleknock and Clontarf in recent weeks, they hit the ground running during the early exchanges.

One of the brightest sparks for the Dublin U-20s in this year’s Leinster Championship, Luke Breathnach (inset) found the target for the away team in the opening moments. Aodhan Clabby also raised a white flag, before Skerries finally hit an attacking stride.

Rob McKey was the first player to get his name on their scoresheet and he was soon joined by Killian McGinnis and Eoin Wilde. The latter is one of four Dublin U20s players within the Skerries ranks – the others being Greg McEneaney, Eoghan O’Connor Flanagan and Ethan Dunne.

Rob Delaney slotted a penalty beyond the reach of Ballinteer netminder JB Carthy (an All-Ireland U-21 winner with Dublin in 2012) and consequently propel his team towards a 1-7 to 0-8 interval buffer.

A brace of points from McEneaney kept the scoreboard ticking over and a superb Ciaran Murphy goal then helped to open up a six-point gap.

Breathnach and Clabby continued to fly the flag for Ballinteer, but O’Connor Flanagan and Delaney ensured Skerries triumphed in the end. This result leaves Harps 10th in the table with five fixtures left to play, albeit they are just three points shy of fifth-place St Jude’s with a game in hand.

It was a profitable evening for Jude’s at Tymon Park as they recorded a 3-14 to 1-2 success over Naomh Mearnog, but it is Thomas Davis who continue to lead the way at the AFL1 summit thanks to a 0-16 to 0-14 victory against Lucan Sarsfields at Kiltipper Road keeping them two points clear of Na Fianna.

The Glasnevin men have a game in hand, but Davis’ remain unbeaten.

Na Fianna produced a strong performance of their own against St Brigid’s at Russell Park, finishing with all of 17 points to spare (3-15 to 0-7). Since losing out to St Jude’s at Somerton Park on March 16, Castleknock have been in imperious form. At the same venue on Wednesday, they squeezed past St Vincent’s on a scoreline of 1-19 to 3-11.

Meanwhile, Clontarf moved into fourth spot with an emphatic 4-20 to 2-11 triumph against Naomh Maur at Rush.