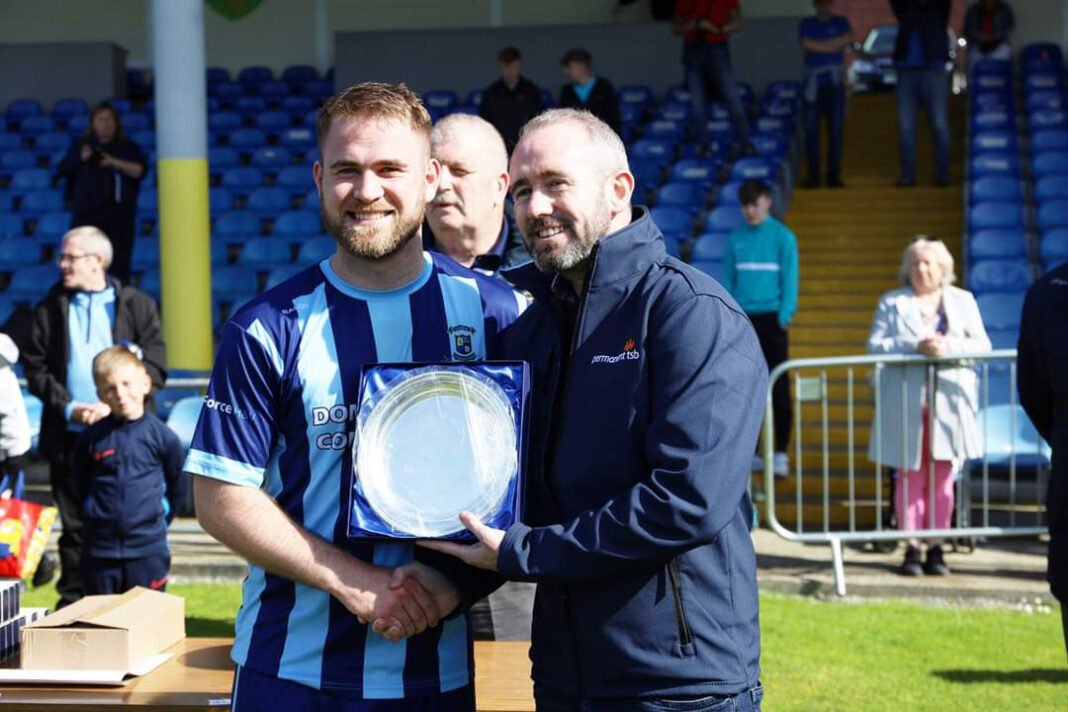 Garreth McCaffrey was the hat-trick hero as St Mochta’s banked the TSB Metropolitian Cup on Sunday at the Belfield Bowl.

The former Shamrock Rovers, Drogheda and Glenavon striker put on a finishing masterclass at UCD’s Bellfield Bowl, scoring half of his side’s impressive cup final haul.

The Senior Sunday side made sure they were not the victims of Usher Celtic’s cup scalping knife and hit Senior 1B champions for six to ensure they finished the season with silverware.

The stylish victory was a fitting way to celebrate manager Brian McCarthy’s 10th year in management and went some way to lessen the pain of losing out on the league title to Crumlin on the final day of the season.

Although the scoreline may suggest otherwise, The Saints were actually made to work for their victory.

Indeed, they trailed at one stage and only started to pull away in the second half.

Leroy Staunton put Celtic a goal up 10 minutes in and moments after former Usher frontman Stephen Donnelly missed a chance for Mochtas in a frantic opening.

Ten minutes later and Mochtas could have been two down but for a trademark block from veteran defender Noel Murray. Within two minutes the top fligth side were level as McCaffrey pounced on a loose ball from a poor clearance to do what he does best.

The 26-year-old was in the right place and the right time again to give his side an advantage going into the turn, pouncing on another Usher error to score his second.

Usher started the second half the brighter and Mark Higgins flirted with leveling, but his deft header kissed the post rather than the back of the net as the hour mark approached.

Within minutes the Porterstown faithful were celebrating for a third time as Nial Barnes, another regular Mochta’s goal scorer, collected a Gareth Brady pass before finishing.

Moctha’s finally found some breathing space with 19 minutes to go when captain Karl Sommers finished well into the bottom corner and it was done and dusted with 11 minutes to go when Mick Daly powered home a Cathal O’Connor corner.

McCaffrey then put the icing on the cake with his 27th goal of the season in injury time. Saving his best to last the striker volleyed home in style to seal the Man of the Match award.

Mini-Marathon returns in all its glory