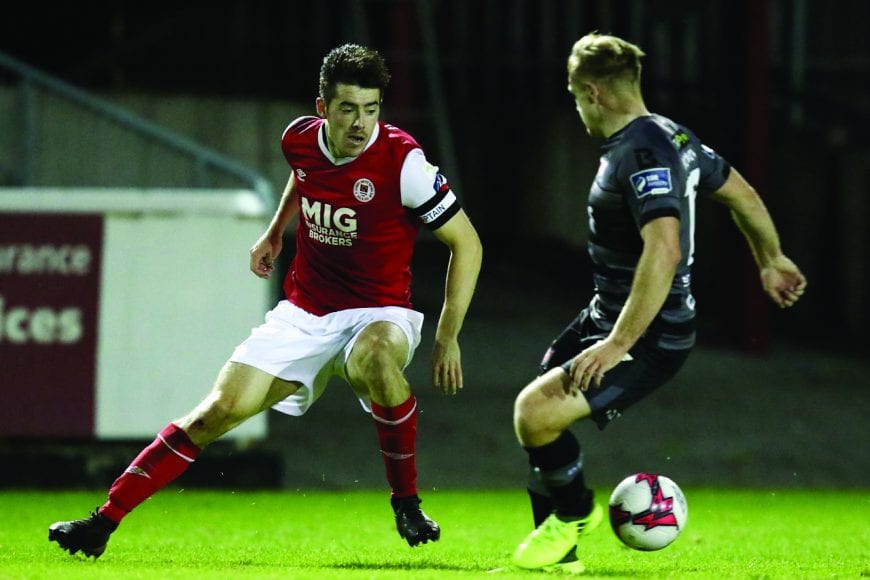 ALMOST 100 people crowded into a function room at Richmond Barracks for a presentation on the early years of St Patrick’s Athletic Football Club.

A greater-than-anticipated turnout for an extensive history involving Shay Gibbons and Matty Geoghegan – who went on to play for Ireland – necessitated the provision of extra chairs. Dermot Looney is a South Dublin County Councillor and teacher from Greenhills but, through his Inchicore-born father, he’s steeped in the history of the Inchicore Saints.

Looney has spent the past few months, publicly via the Twitter account @HistoryStPats, piecing together the club’s formative years from newspaper clippings and archival material.

The Barracks, located just yards from the club’s famous home of Richmond Park on Emmet Road, was a particularly apt location for Looney’s presentation, which reached back to the 19th Century.

It took in precursor clubs to the Athletic, including those of the GSWR (now CIE) and several including the name St Patrick’s, perhaps in reference to St Patrick’s Terrace in the Ranch.

While St Patrick’s Athletic themselves only officially formed in 1929 – this year marks the club’s 90th anniversary – soccer has long been the dominant sport in this part of working-class Dublin.

However, the Saints are the only major Dublin club that haven’t had a book written on their history, and that’s something Looney intends to put right by the end of the year.

“The Pat’s 90th was in on its way, and I noted the club hadn’t had a book written about it, which was unique among the major Dublin clubs,” Looney tells the Dublin Gazette.

“There’s no plaque commemorating the founding of St Patrick’s Athletic, which is again unique among the big four in Dublin. I thought we needed to do a bit more in promoting our history and research more into it, so I met with Pat O’Callaghan and got the help of different people to put together the story of the club.”

Looney’s history is littered with nuggets like the time they were forced into a play-off for an AUL title when their rivals got the win they needed thanks to three late penalties for handball by the same player.

It’s also filled with names like Dempsey, Dunphy and Markey and other families from the area that crop up time and again on the Pat’s timeline.

The sense of family and community is at the heart of Looney’s crowd-sourced project, and something he hopes will be promoted by this work.

“What you see with Pat’s fans, even if they don’t live in Inchicore, often their parents are from the area.

“It’s about creating a sense of pride. When people have pride in their football club and their community, they tend to be happier firstly, but those two things go hand in hand.

“A community that is proud of itself, and proud of its achievements through football or anything else, is going to be a better community for people to live and work in.