JLT Condor’s James Gullen claimed the An Post Ras 2017 honours in Skerries last Sunday as he produced a week of consistent finishes to land the yellow jersey.
Despite no stage wins, he secured the leaders’ shirt of stage five and defended it into the north Dublin town.
Przemyslaw Kasperkiewicz was the stage eight winner in Skerries, giving the An Post Chain Reaction team their third stage win of the week.
The 22-year-old from Poland added the stage win to his King of the Mountains jersey.
Kasperkiewicz came home the strongest from Samuel Jenner (Australia National Team) in second and Jerome Mainard (France Armee de Terre) in third.
After a dismal day of rain on Saturday, the riders welcomed the dry weather for what was the shortest route of the week at 129.4 kilometres. The final stage took the riders along similar roads as in recent years; heading through Nobber, Navan, Kentsown, Duleek and over Bellewstown (a category three climb), Snowtown Hill/Harbourtstown and Ringfort View before being welcomed by a huge crowd in Skerries.
The route took the peloton around the finishing circuit three times with the riders making three climbs over Black Hills before the ceremonial finish.
Shortly after the 12.30pm start, eight riders went clear for a short time before being reeled in by the peloton.
The bunch travelled well together until 48.2 kilometres where a lead group of twenty including Swords man Eoin Morton (Ireland National Team), Sean McKenna (Ireland An Post Chain Reaction), James Davenport (Cork Strata3/Velo Revolution), Conn McDunphy (Donegal Voodoo Performance), Darnell Moore (Down Bikehouse), Sean O’Malley (Mayo Westport Towers Bar Covey), Felix English (Westmeath Team Planet X Carnac) and Keith Finn (Westmeath Team Planet X Carnac) went away by 55 seconds.
From the leading group, it was McKenna who took the climbing points at Bellewstown, Ringfort View and Black Hills whilst stage three winner Michael Storer claimed Snowtown Hill/Harbourtstown. 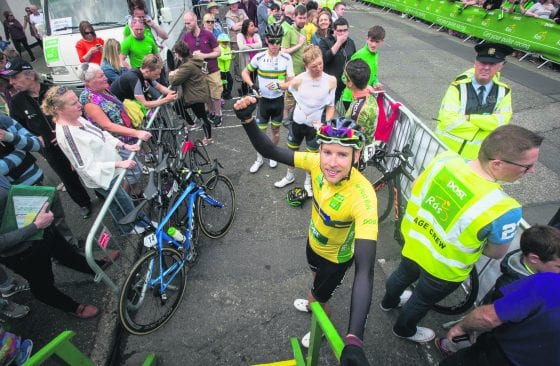 Coming into Skerries for the first of three laps of the finishing circuit, the gap between the leaders and attackers closed with the two groups merging into one.
From here, four riders including Mark Dowling, Kasperkiewicz, Storer and Samuel Jenner pushed on to establish a 32 second gap.
General classification leader Gullen’s JLT Condor team chased behind in search of securing the overall win and did enough to carry their rider home.
The final two takes of Black Hills went to Storer and King of the Mountains winner, Kasperkiewicz.

“It’s brilliant to win a race like this. You really have to rely on your team mates to get the overall win. They kept me going so this win is all down to them.”

“I want to say a huge thank you to my team mates. We did this together and it was a fantastic week for all of us.”

It was a superb stage for county rider Mark Dowling who finished the best of the Irish riders in fourth.
The ceremonial finish saw the presentation of the overall winners from the week.
Daan Meijers (Netherlands Delta Cycling Rotterdam) won the points classification, Michael O’Loughlin (Britain Team Wiggins) won Under-23 Rider whilst Daire Feeley (Galway Team iTap) took Irish County Rider.
The final stage winner, Kasperkiewicz was crowned King of the Mountains. Netherlands Delta Cycling Rotterdam were overall team winners whilst Cork Strata3/VeloRevolution were best of the county teams.

Rovers travel to Dalymount in 2020 opener this...

Mun need to use league springboard for the...

O’Leary hoping for explosive start to Leinster U20...

21/10/2019
We use cookies to ensure that we give you the best experience on our website. If you continue to use this site we will assume that you are happy with it.Ok