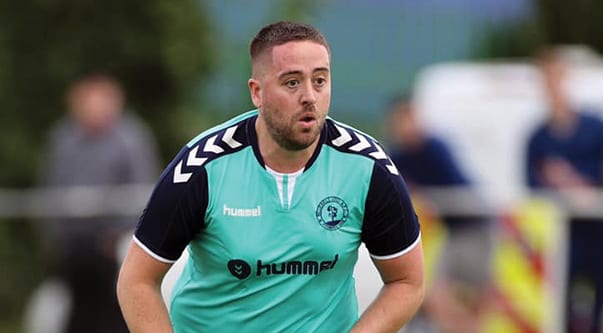 SHANE “Mario” Dolan will look to do more than just plug a hole as he takes over as manager of Leinster Senior League powerhouse Bluebell United for the coming season.

The 33-year-old takes the hotseat as the squad that has been at the Leinster Senior League forefront for much of the last decade rebuilds with a youthful outlook.

Dolan has spent the past couple of years with the Bell’s Saturday side, playing and working with the up-and-coming strikers, following a long and successful career north and south.

The Swords man had spells with Shelbourne and Drogheda United but is best-known for his exploits north of the border with Ballymena United, Warrenpoint Town and Portadown.

And the Red Cow club’s committee were impressed enough by Dolan’s credentials – he is currently pursuing his UEFA coaching badges – to offer him his first post in management.

“I was playing at Bluebell for the last 18 months, and I was involved with both the senior and the Saturday side,” Dolan tells the Dublin Gazette.

“With the previous management team stepping away, the committee asked would I be interested in going for the role. I talked to some of my teammates, and they said: ‘go for it.’

“I’m under no illusions; it’s a huge job, but I’ve decided to go in there and give it my best shot and hopefully bring some success and help players to develop and fulfil their potential.”

Bluebell have forged a reputation in recent years as a haven for talented players to rediscover their love for football after falling out of the game at home and in the UK.

The likes of Dean Ebbe and Richie Towell – currently playing in the UK with TNS and Salford City – Izzy Akinade and Brandon Miele have returned to professional football following spells there.

One hoping to follow in their footsteps is 18-year-old striker Josh Doyle, who recently left the Bell for semi-professional football in Lurgan with Glenavon.

He expects to lose another couple of players before the League of Ireland transfer window closes on Thursday, and he reveals he will always encourage players to test themselves at the highest level.

“When I took over the first job, I had to touch base with the entire squad, to contact them all individually to let them know what’s going on.

“It’s a very hard time for everyone so I wanted to make sure, first and foremost, on a personal level they’re OK and if there’s anything I can do, even if it’s only a chat, that they have my number.

“We don’t have a date when we can return training, we don’t have a start date for the league, so you can’t really get players to commit but you can let them know they’re wanted.

“Some of the lads have been contacted by League of Ireland clubs and they’ve contacted me to ask what do I think; I tell them to absolutely go for it.

“If there’s an opportunity, I’m absolutely telling them to take it and test themselves at a higher level, and to know they have a place at Bluebell if it doesn’t work out.”