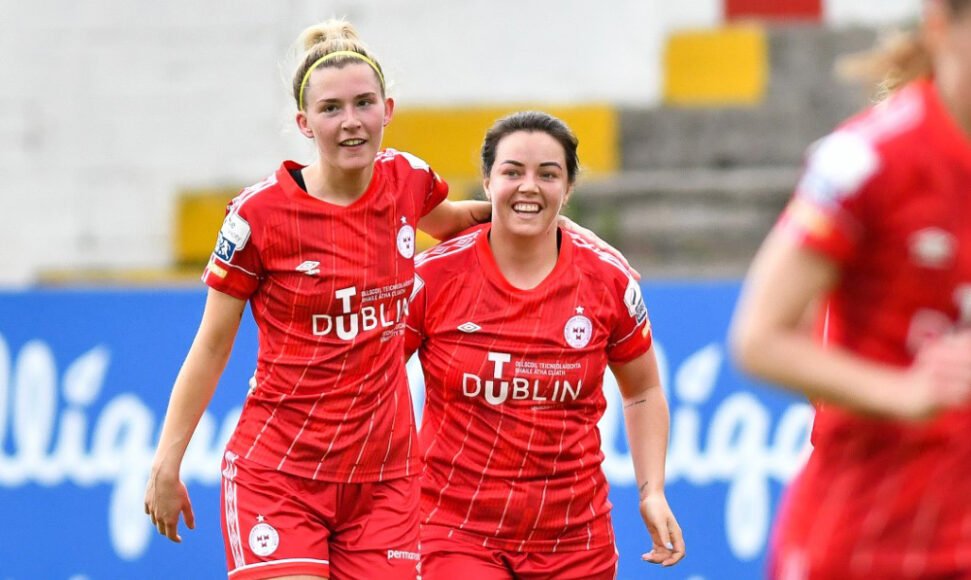 SHELBOURNE extended their lead at the top of the Women’s National League with a 4-0 win over struggling Cork City, but perhaps the result of the round came at Dalymount Park where Bohemians upset title hopefuls Peamount.

Abbie Larkin fired the Reds in front at Turners Cross before Saoirse Noonan doubled the lead on 34 minutes.

In the 86th minute, Noelle Murray slotted home a third and their fourth and final goal came through 16-year-old Lia O’Leary, who calmly kept her composure to slot home.

Rebecca Cooke’s second half brace sealed an impressive 2-1 win for Bohemians over Peamount at Dalymount Park.

Áine O’Gorman put Peamount in front inside 11 minutes after Sadhbh Doyle’s terrific ball. The visiting side perhaps disappointed that they didn’t add another soon after, as Tara O’Hanlon and Jetta Berrill were both denied by Rachel Kelly in the Bohemians goal.

O’Gorman and Karen Duggan both went close in the second half, but it was the home side who levelled the game. Bronagh Kane’s terrific cross set up Rebecca Cooke, who coolly slotted past Niamh Reid-Burke on the hour mark.

The home side hit a late winner, again through Rebecca Cooke. Peamount couldn’t find an answer though, as they go five games without a win.

Previously drawing their last game against Peamount 1-1, Bohemians come away with all three points this time. and deservedly so.

One of the most anticipated games of Series 12 did not disappoint as second-place Wexford took on third-place Athlone to give us an entertaining fixture at Ferrycarrig Park.

Going into the game unbeaten in four, Youths soon took the lead. Orlaith Conlon’s superb strike hit the top corner to put the hosts in front on ten minutes. It remained a close competition however, as neither side troubled the goalkeepers for the remainder of the half.

Ellen Molloy scored her 11th goal of the season soon after the break. Freya DeMange’s dangerous cross found Molloy, who made no mistake from close range.

Athlone hit back straight from the tip-off however, as Róisín Molloy sent an excellent chip over Wexford keeper Maeve Williams and into the net. The Youths saw out the win however and remain second in the table. Athlone’s impressive winning streak comes to an end, but The Town still remain in third position on the table.