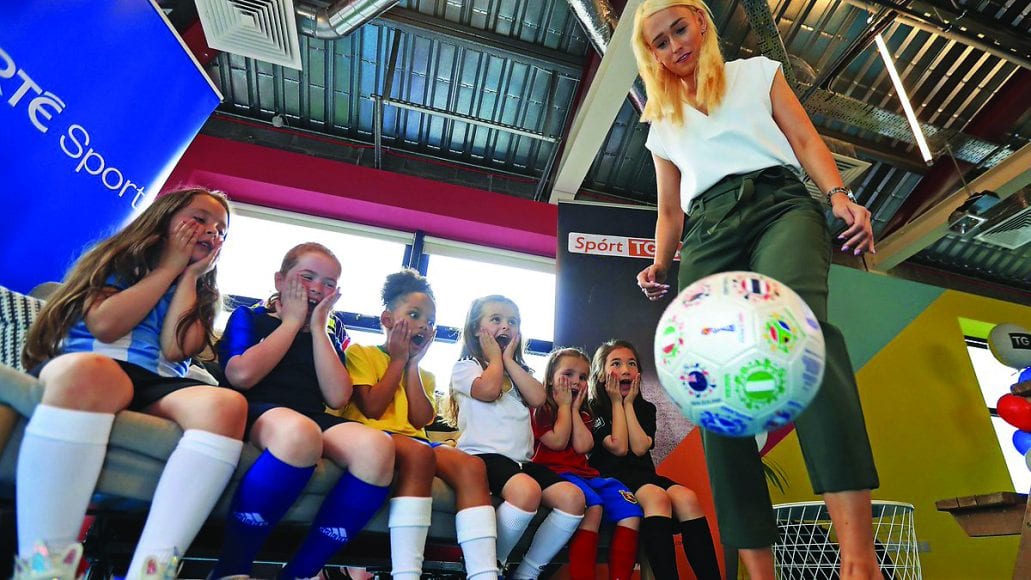 Stephanie Roche never dreamed of being a professional footballer growing up but she hopes she’s part of the last generation to grow up without that ambition.

Ask any young boy what he wants to be when he grows up and chances are a lot look to emulate Lionel Messi or Cristiano Ronaldo.

Before the likes of Roche herself and Ireland teammate Megan Campbell blazed a trail for female footballers, there were few comparable role models for 50% of the population.

Roche was in Dublin on Tuesday afternoon for the launch of RTÉ and TG4’s coverage of the Women’s World Cup in France, which kicks off on Friday evening.

The two national broadcasters have secured the rights to air all 52 games from the tournament, with TG4 set to show 29 games while RTÉ will broadcast 23.

And Shankill native Roche is convinced the tournament’s unprecedented coverage on free-to-air national TV will be part of a sea-change in the way women’s sport is viewed in this country.

“For me, growing up, I got into football through playing with my brothers,” she tells the Dublin Gazette.

“My dad was the one who ran my brother’s team and we would have always gone to the matches and played at half time with my younger brother, who would have been too young to play.

“Through that, I started playing football with the boys in the street. I never really had a female influence, although my mam was always supportive and apparently she played when she was young.

“A lot of young girls and boys will be able to look up and see some female players and, asking in school ‘who’s your favourite player?’ it’s not just going to be Cristiano Ronaldo.

“It might be Alex Morgan or it might be something else, so I think it’s a great thing what’s happening here and hopefully we can change people’s perceptions of women’s football.”

Working at the tournament will be a bittersweet experience for Roche, who missed out on the majority of the qualifying campaign after breaking her leg against Northern Ireland.

That also brought an early end to her time with Sunderland, and delayed her getting started at her next club, Italian Serie A side Florentia.

That meant missing out on crucial games against the Netherlands and Norway, both of whom qualified for the finals – the only group to yield two qualifiers and thus the most difficult.

Roche, who has been training with former club Peamount United, insists she’s already over the World Cup as she weighs up whether to accept an offer from Florentia or look to return to England.

“For me as a female footballer, it’s just brilliant that it’s being shown on live TV. We want to be part of it in a better way, which would to be at the World Cup, but unfortunately we didn’t make it.

“When we watch the teams we played against, or who we’re due to play against, you’re always going to compare yourselves to them.

“We’re over the World Cup at this stage and we’re focusing on the European Championships. We’re going to be watching Germany so we’ll be looking at that trying to get ready for our game in September.”