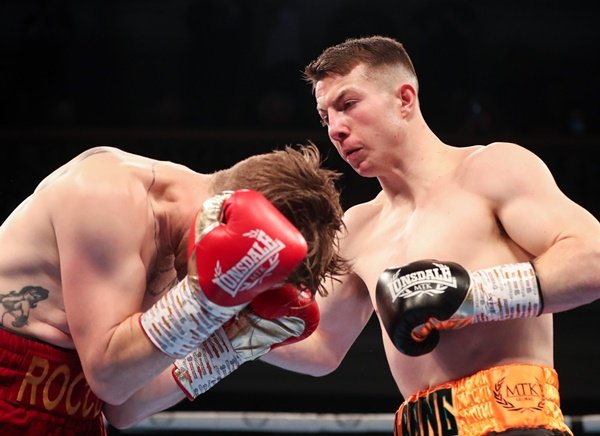 Pierce O’Leary has set his sights on bringing big-time boxing back to Dublin after performing under the TV spotlight for the first time last week.

The 22-year-old Dub delivered on his ‘Big Bang’ promise in London’s Copper Box Arena, making a first impression and a half with a sensational one-punch knockout on his Quennsberry and BT Sports debut.

The Sheriff Street talent has been impressing in the background on smaller hall shows since turning professional in 2019. Indeed last year he registered three eye-catching stoppage wins, earning himself genuine contender status and winning Irish Boxing Awards Knockout of the Year along the way.

However, Saturday was his chance to show a wider audience what the hype was about as he featured on a Frank Warren TV bill – and he most certainly took it, stopping Robin Zamora (inset) in the second round of a bout scheduled for eight‘

Big Bang’ walked the Nicuagurian onto a right hook and had Robin more than rocking on his legs, the away fighter was all but out on his feet forcing the referee to jump to his rescue.

The stoppage, O’Leary’s fourth in a row, was so standout it went viral, something aided by the platform it played out on. The Inner City Dub now wants to build on the run of wins and use the increased profile and improved promotional standing to bring boxing to his home city.

It was something he talked about pre victory and something he was keen to discuss post having his hand raised.“Lots of people came over here spending €700 on flights and hotels, that’s €700 before spending money,” he said of his support. “For people to spend money like that just to see me it’s crazy and I’m forever grateful. It’s just a matter of time before I can return the favour by bringing boxing back to Dublin.”

Speaking before his fight he said: “I’m going to bring boxing to Dublin. I am going to bring big fights and win big titles in Dublin. With Frank and Queensberry behind me, that’s something I can say I’ll do.”Light welterweight O’Leary, who reached the first pro non-title milestone of 10-0 with the win, hopes to be back out in October and has his sights set on European glory early next year.“

I don’t want to give too much away when it comes to my goals but next year I want to start fighting for European titles, it’s only around the corner.  Big things are going to come.

”The young father’s power has been a topic of discussion since his amateur days and it was obvious he could bang as soon as he turned over.