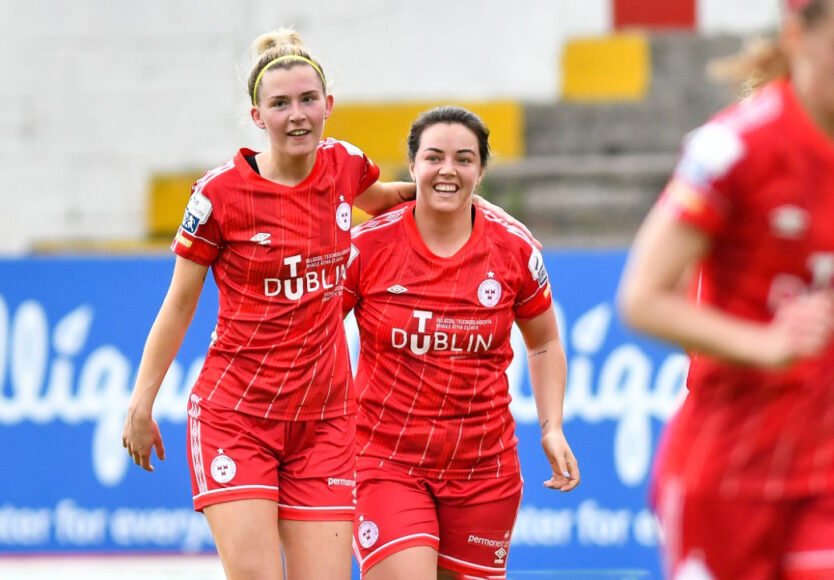 An extremely tense affair over in Ferrycarrig Park as Wexford Youths and Peamount United play out a 3-3 draw, while Shelbourne got revenge over DLR Waves and Athlone Town grab their fifth win in a row.

In the previous fixture between these two sides, it was DLR Waves who deservedly came out 1-0 winners. This time around, Shels came out with a vengeance and their second half performance saw the Reds come out victorious.

Shels found it hard to get a foothold in the first half, with some misplaced passes and uncharacteristic mistakes. It was 0-0 going into the break.

The start of second half saw Shelbourne’s Keeva Keenan make way for Abbie Larkin, who quickly became labelled the super-sub for the game. Her pace and tricky footwork set the tone for the second half, and Shel’s upped their tempo. In the 52nd minute after a fantastic delivery from Pearl Slattery, Saoirse Noonan pounced on a mistake in the box from the DLR defence to make it 1-0 to the hosts.

In the 74th minute, Shels extended the lead.  It was Noelle Murray (far right ) this time on the left side who made a brilliant run into the box, whipped the ball across the six-yard box, and Ziu was there to get Shelbourne’s third. The Reds got their fourth and final goal from an accurate corner kick, and Shauna Fox rose highest to make it 4-0 in the 79th minute.

Galway and Bohs shared the points at Eamonn Deacy Park. The first chance came the visitors way on 18 minutes when the ball broke to Sinead Taylor inside the six-yard box, but Abbiegayle Ronayne made a super save.

Undeterred, Taylor netted the opener minutes later. Despite going behind early on, Galway enjoyed good spells of possession and their persistence paid off as Chloe Singleton’s excellent header levelled the match on 44 minutes.

Ellen Molloy netted an excellent brace as Wexford and Peamount produced the game of the season at Ferrycarrig Park.

The visitors took the lead on 13 minutes through Erin McLaughlin but Wexford equalised straight from kick-off through Ellen Molloy.

Molloy netted her second on the half  hour mark, before  the Peas levelled six minutes later via Sadhbh Doyle. Wexford retook the lead just shy of the break,  before eAine O’Gorman smashed a leveller.

The Hunt is Over – Dublin Duo Launch “The Perfect Pint”