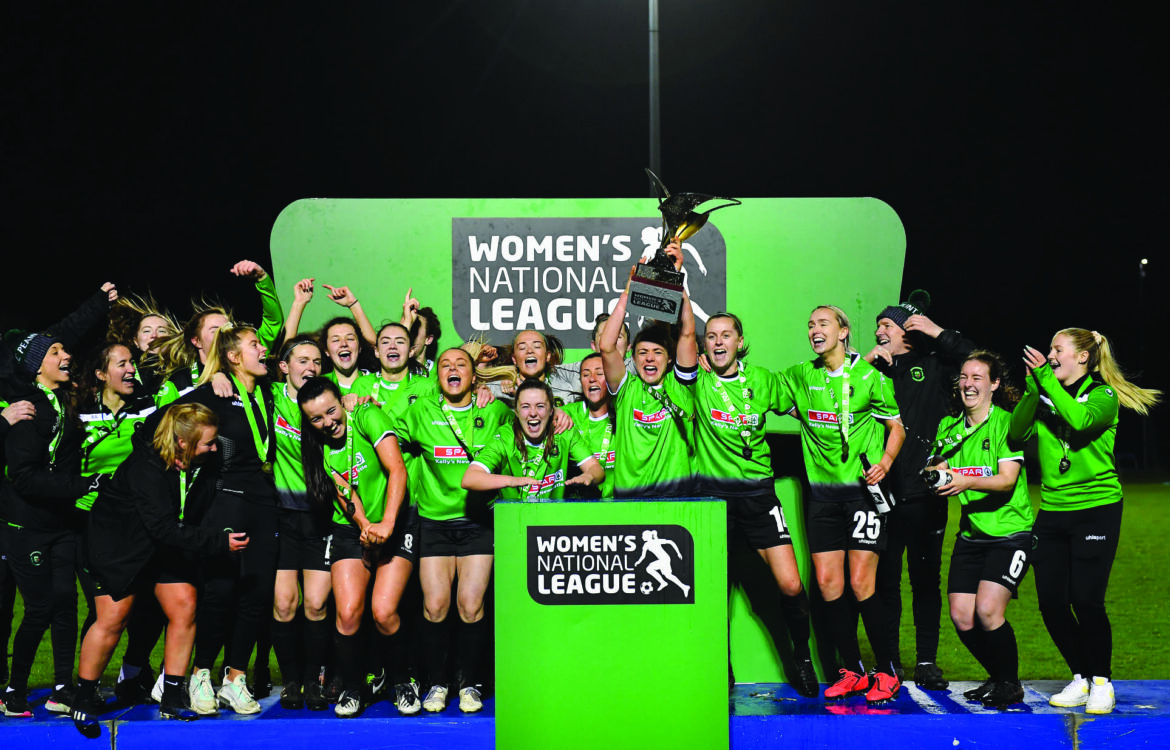 Peamount United remain on course for their first-ever league and cup double as they sealed the Women’s National League in a pulsating winner-takes-all clash with Shelbourne on Saturday night.

Captain Aine O’Gorman netted twice, either side of Karen Duggan’s well-taken header, in the closing stages as the Reds’ hopes of their first title in four years evaporated in the chilly Greenogue air.

The bitterness in the air was echoed by the bitte taste that will linger in the away side’s mouths for months to come as they were the better and more threatening side for the majority of the game.

Indeed, it was O’Gorman’s superb last-ditch tackle to deny Rebecca Cooke a second goal, which surely would have wrapped up the title, that kickstarted the champions’ renaissance.

Whelan had already been denied twice by the excellent Peas keeper Niamh Reid-Burke during a tense but entertaining first 45.

The striker, who can take consolation from her inclusion in the Ireland squad to face Germany next week, finally got the better of Reid-Burke with a fine chipped effort seconds after the restart.

It was to be the inspirational O’Gorman’s night as she followed up her leveller with a close-range finish to clinch it, Duggan having nodded home Megan Smyth-Lynch’s corner to put them in front.

The win means the result of their final league game, away to Wexford Youths, next Saturday is immaterial and manager James O’Callaghan will be able to rest some of his internationals.

“We have the final to look forward to, which is brilliant, and it’s great to have the league wrapped up now,” the Tallaght native told the Dublin Gazette.

“It was great to win it and get it over the line. We have a match against Wexford next week and then we’ll be focusing on the cup final against Cork.

“If anyone has niggles it could be an opportunity to rest them – that’s why it’s great to win the league tonight.”

O’Callaghan reserved special praise for their opponents on the night, whose young squad will surely be again involved in a three-way tussle for the title next year with Peas and Wexford.

“Shelbourne are a phenomenal side, very fast, technically very gifted. They love to keep possession and they move the ball around really well.

“I thought the first 20 minutes, Shels were the better team and then we finally got to grips with them.

“We probably just wanted it a bit more towards the end of the second half, and we just went on to the end and got the result.”

O’Gorman, who will hope to exorcise her personal demons against Germany having scored the own goal that brought defeat in Ukraine last month, felt it was a fitting way to seal the title.

And having been beaten in the final at the Aviva by Wexford in each of the past two seasons, she has her sights set on a historic double when the showpiece returns to Tallaght on December 12.

“I think it was a nice way to win in the end. I don’t think we played at our best in the first half but we all dug in, showed our character, worked hard and got the result.

“The final is something we’re really looking forward to having lost it the last two years.

Christmas FM to return to the airwaves this weekend