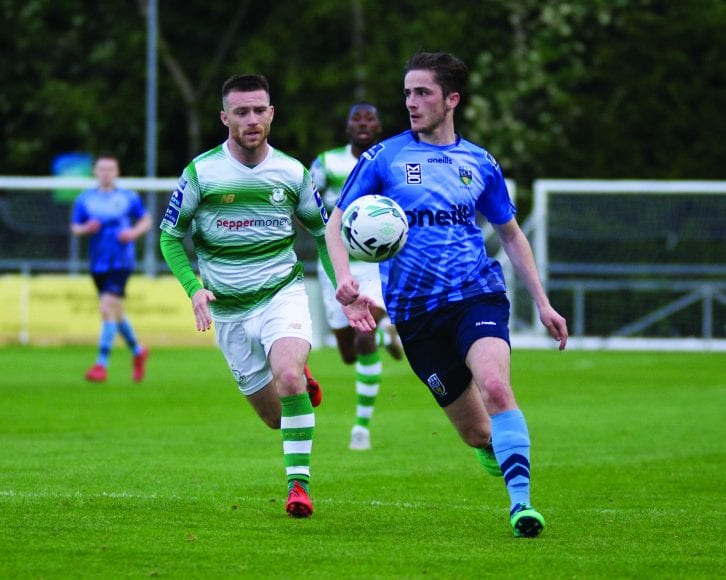 UCD recorded their eighth straight defeat and slipped to the bottom of the Premier Division following back-to-back home losses to Shamrock Rovers and Cork City.

Dan Carr’s goal settled the tie for Rovers on Friday night before a late strike from debutant Cian Bargary saw the Leesiders to victory at the UCD Bowl on Monday evening.

Finn Harps’ last-gasp win over Waterford on Friday means that, despite their heavy defeat to Rovers on Monday, Ollie Horgan’s side move up to ninth on goals scored.

While the Students could have few complaints about their defeat to table-topping Rovers, the defeat to Cork was definitely three points dropped for College.

City were the last side to be beaten by UCD, on their last visit to the Bowl in April, when an injury-time penalty from captain Gary O’Neill sealed a 2-1 comeback win.

Eight defeats since then have seen Harps rein in an eight-point deficit while, more worryingly, UCD have now gone six full games – nine hours – without scoring a goal.

Reprising the 3-5-2 system employed against Rovers, UCD dominated for the most part but had to work hard to break down a dogged and unadventurous Cork side.

Conor Davis saw his shot blocked and Richie O’Farrell volleyed Neil Farrugia’s cross over the bar early on, before Davis wasted a glorious chance from inside the box.

A mistake from City keeper Mark McNulty should have provided Sean McDonald with the opener, but the striker took too long and the keeper was able to recover to save.

Farrugia – one of three Ireland under-21s, along with Liam Scales and Conor Kearns selected by the watching Stephen Kenny for the Toulon Tournament – was the standout player.

The winger nutmegged right-back Gary Boylan and fizzed in a cross that should have been poked home.

Another mazy run could have produced a penalty when he went over Conor McCarthy’s challenge, and another fine run and cross was inches from being nodded home by Davis.

The Students’ luck is very much out at the moment, however, and they conceded against the run of play when Karl Sheppard’s looping header was touched onto the bar by Kearns.

“I’d probably be more worried if we weren’t creating anything. The session part has been good and we probably lacked a bit of creativity in our previous games. At least now we’re creating chances as well. The final thing is to finish some of those chances we create.

“We’ve two choices now. One is to feel sorry for ourselves, stop doing some of the good work we’re doing because we’ve a pain in the ass and we’re not getting the rewards from it.

“Or you have the balls and the courage to turn up for work again on Wednesday.”

Balbriggan link past and future with a clubhouse of their own