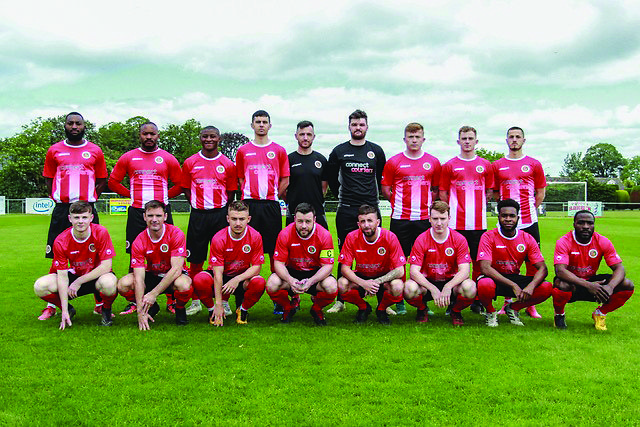 LUCAN United are dreaming of an FAI Senior Cup clash with partner club Shamrock Rovers after seeing off Limerick side Aisling Annacotty 3-1 on Sunday.

The tie had been delayed until now as Aisling awaited the outcome of their unsuccessful challenge to take Sheriff YC’s place in the FAI Junior Cup final.

The visitors pushed John Doyle’s side all the way to extra time before the side recently promoted to the second tier of the LSL pulled away to victory.

Marco Chindea put Lucan in front before Ben Banaghan equalised in the second half, however goals from Harmony Mercer and sub Dave Bracken settled it in extra time.

Chindea put Lucan in front two minutes before the break as a run and pinpoint cross from midfielder Michael McLoughlin left the striker with a simple finish.

Aisling were well-organised and caused Lucan problems on the break, and they punished them late on when Banaghan cut in from the left and curled into the far corner.

Just before half time in extra time, Lucan hit the front again in spectacular fashion as Mercer met a corner Kanu-style with a flying backheel.

And Bracken settled the tie soon after from the penalty spot, dusting himself down after being tripped in the box to take the kick himself.

“We’d love to get someone decent,” Doyle tells the Dublin Gazette. “We’re hoping to get our partners, Shamrock Rovers. With a bit of luck we might get them, which would be great.

“We’ll wait and see what happens. That’s something for us to look forward to over the summer.”

Lucan play Rovers every February in the Molly O’Toole Memorial Cup, but meeting them in an FAI Cup game would be a completely new experience.

Before they can look ahead to July’s draw, Doyle can savour their promotion and look ahead to making a couple of judicious addition for their Sunday Senior 1 bow.

“I’d say it’ll help us get some players in. I’m not going to be looking for too much. Obviously you have to sit down with the lads that are there and see who’s staying or going.

“You won’t know where you are until you do that first. I’m confident most of them want to stay – I’ve had chats with some of them already.

“Things happen outside football and somebody you think you have might not be available next year.

“We’ll definitely be adding two or three, and hopefully that’s all we’re adding.

“We don’t want to be going out looking for six or seven players because we’ve a good team, a good team spirit and a good dressing room.”

Nicole Grounded for Bloom in the Park