TWO of Ireland’s finest riders took home the spoils from the Friends First Laragh Classic in almost perfect conditions under blue Wicklow skies last Saturday in the title races.
The men’s race was taken by Blanch’s Philip Lavery, riding for Canadian outfit H+R Block Racing, after an aggressive day at the front of a quality field. The women’s race was claimed reigning and three time national champion Lydia Boylan, from Ringsend, of Team WNT. 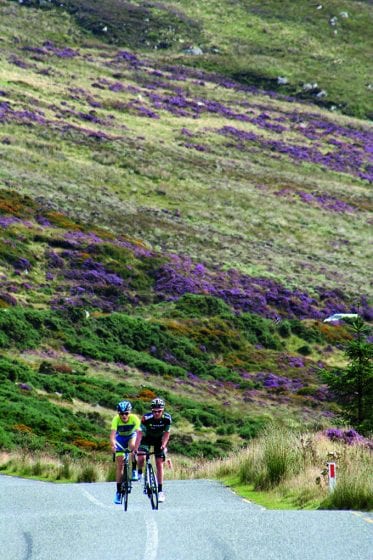 For the 27-year-old Lavery, it was his first ride in the series this season, outdoing the regulars over a course including the Wicklow Gap, to take the final men’s national road racing championship race of 2017.
Lavery has been competing at a higher level that many of his competitors having grabbed major results across the An Post Ras and French AC Bisontine in recent years.
Lavery was aggressive from the off forging his way into a breakaway group of 10 riders as the race approached Rathdrum. It was there he stayed, firstly following Lucan Cycling Road Club star Dermot Trulock on the first ascent of the Wicklow Gap before the initial break group re-joined on the N81 near Blessington.
Knowing they would not have made it to the finish with the chase being organised behind, Lavery was happy to be caught and follow the next wave of attacks and that he did, riding clear with Sean Lacey of Aquablue Sport Academy.
Lavery was able to push away from Lacey on upper reaches of the second ascent of the Wicklow gap and descend to Laragh with 55 seconds to spare. Lacey would eventually be caught by his pursuants, Adam Stenson (Bikworx) and Conn McDunphy (Team Raleigh GAC), with the final podium consisting of Stenson and Lacey respectively.
Lacey’s third place allowed him to claim the Cycling Ireland National Road series of which the Laragh Classic was the final race.
The women’s Laragh Classic followed the same circuit with the iconic Wicklow Gap climb dictating the shape of the race. On the first ascent a selection of five riders was forced containing National Champion, Boylan (Team WNT), Alice Sharp (NCC group-Kuota-Torelli), Claire McIlwane (Phoenix CC), Katharine Smyth (Team Madigan CC) and Sharon Bird (Team Madigan CC).
This group would stay together to the finish, pulling out time on the pursuers as they worked throughout, even a little too much according to Boylan.
“The group was riding really hard which I didn’t think we needed to do so I was playing the sprinters card a little and trying to hide.”
Boylan went on to say “from the perspective of womens racing, putting on a race that is almost 100km long and takes in such an iconic climb is fantastic and all credit to St Tiernans for doing that as it makes you want to enter, it certainly made me want to ride!
“It was a great days racing and I am very proud to have won my first Irish National Road Series Race.”
Boylan now moves onto the An Post Rás na mBan which kicks off in Kilkenny this week as one of the favourites.

Clondalkin becoming a magnet for foodies

Galty aiming to bring quality back for Drimnagh...

Courageous Hoops put it up to Milan in...

Boden net five in a row against...

Walker in an indoor Rovers wonderland

30/01/2020
We use cookies to ensure that we give you the best experience on our website. If you continue to use this site we will assume that you are happy with it.Ok