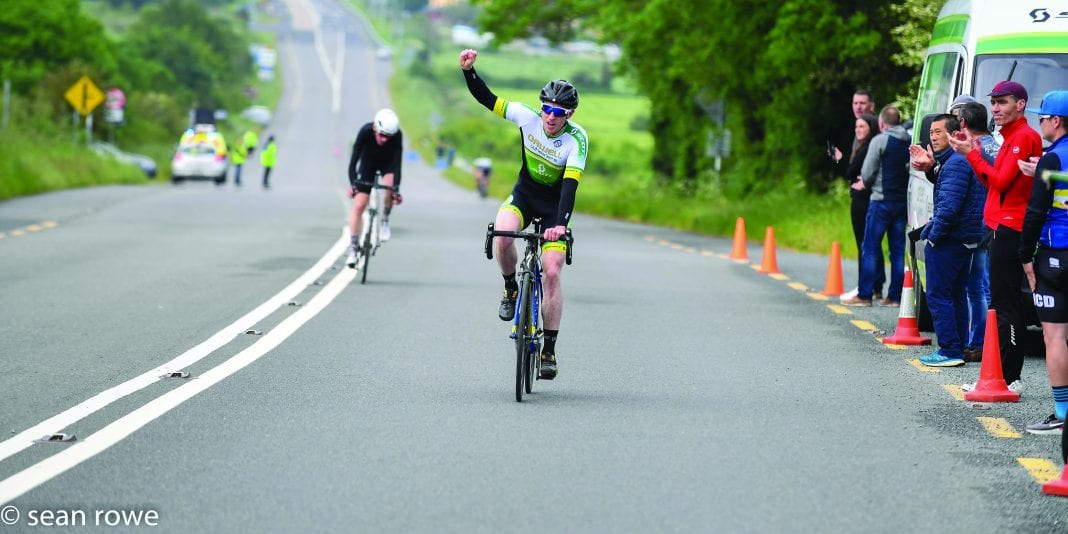 SCOTT Orwell Wheelers’ Paul Forristal defended the Noel O’Neill Trophy last weekend ahead of a strong field featuring some of the best racers in the country on the roads around Dublin and Wicklow.

It featured three stages over two days, starting with an 11 kilometre time trial which was won by Paul Kennedy with Kevin McCambridge in second on a wet and windy morning, making for a tough start for the riders.

Forristal took over in stage two which featured short laps and lumpy road. The group stayed together for the first two of 10 laps before a break of about seven riders got clear.

On the final lap, Forristal attacked on the climb and the only one to go with him was Mark Smith of Ciclotel.

As they rounded the final corner with 400m to go, it was a two-horse race with Forristal pulling clear in the last 100m with plenty of time to debate a one or two-handed salute before he crossed the line.

It put the Orwell man in good shape for Sunday’s final stage.

It was a morning of typical Irish weather that greeted the racers – rain, sun, wind….it had it all.

Rolling out at 9am, Forristal was wearing the yellow jersey after Paul Kennedy did not start.

Conor Murnane was in green while McCambridge was in white and Mark Smith in the polka dots.

Four laps of a tough 27 km circuit with only five kilometres of flat road each time meant the race would suit the fittest and toughest.

In lap one, the race ebbed and flowed with a couple of attacks as riders found their race legs and checked out the circuit as a small break started to form.

On lap two, the break bedded in and contained most of the main protagonists – Forristal, McCambridge, Moriarty, Curley, Keogh and McCarter.

Behind, the field split into several chasing groups including green jersey wearer Murnane who fought hard to get to the break for the first couple of laps but never made the catch.

This break stayed away until the end with Tom Moriarty taking the king of the mountain points on three of the four laps before falling off the back of the group last time up the climb.

The remainder came to the finish more or less together with Liam Curley taking the stage in an exciting sprint with Cian Keogh to consolidate his place on the overall podium. Darragh McCarter took third place.

In the overall, Forristal retained his title with McCambridge in second and Liam Curley third.