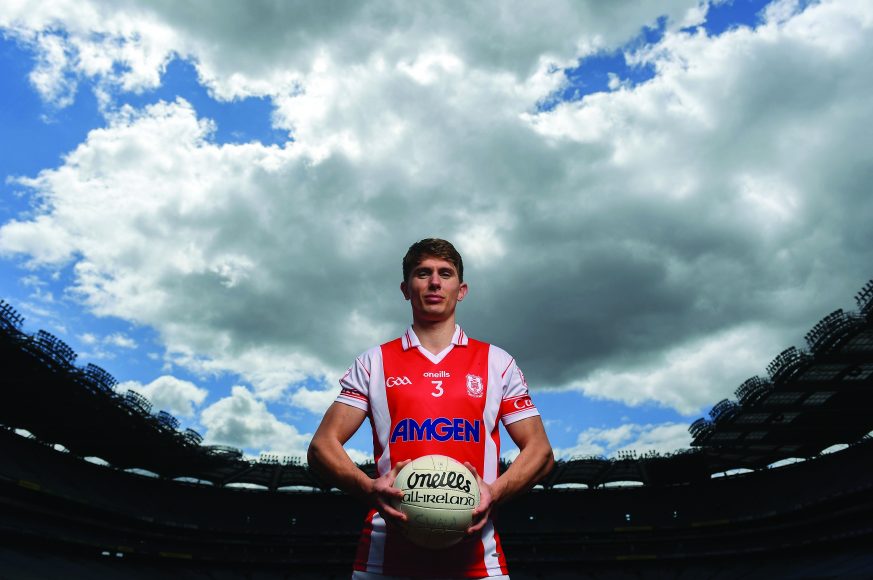 CUALA man Mick Fitzsimons broke his scoring duck at the 100th attempt for Dublin as the defender popped up with a 72nd minute point in the hammering of Louth in the Leinster championship.

“There’s definitely a novelty to it. I’ve probably only been in position once or twice, one of them being the 2016 final where I tried to lay it off – unsuccessfully! – and nearly cost us. I wouldn’t even score at training.”

For the defender, he admitted the point was a cause of much mirth in the changing rooms afterwards.

“Oh yeah, they all found it very funny. But that’s not my side of my game – I’m more defensive, and obviously help in transitioning out of defence, but I wouldn’t be looking to get on the end of scores.”

Fitzsimons was speaking in Croke Park on Tuesday on a special day for his club as they announced the first ever GAA club sponsorship to include education and employment incentives as Cuala links up with American biotechnology company, Amgen.

Amgen’s support of Cuala will last for 3 years and will include an annual education bursary and mentoring for the bursary recipient, a guaranteed place on an eight-month paid Internship programme as well as funding the preparation of all the club’s adult football and camogie teams. This includes five adult men’s football teams, three adult women’s football teams and three camogie teams.

For Fitzsimons, the 100th game with Dublin was not something he had been aware until county secretary John Costello mentioned it. In that spell, the 30-year-old has played his part in six All-Ireland successes, something made all the remarkable in that he was not on the county radar during his youth and school days.

“Yeah, it is one of those things. It’s a cliché but you don’t take count of it and you probably don’t appreciate it when you’re doing it.

“But, yeah, when I came on and started in 2010, your focus is just to get a few games – and then it spirals out of control.

“There’s lulls where you don’t know whether you’ll keep going, and there’s times when you really want to keep going.

“When you meet some of your old mentors you think back how they helped you along the way.

“I started in Confey and then when we got up to Dublin, bringing me to Cuala and even the school that I was in.