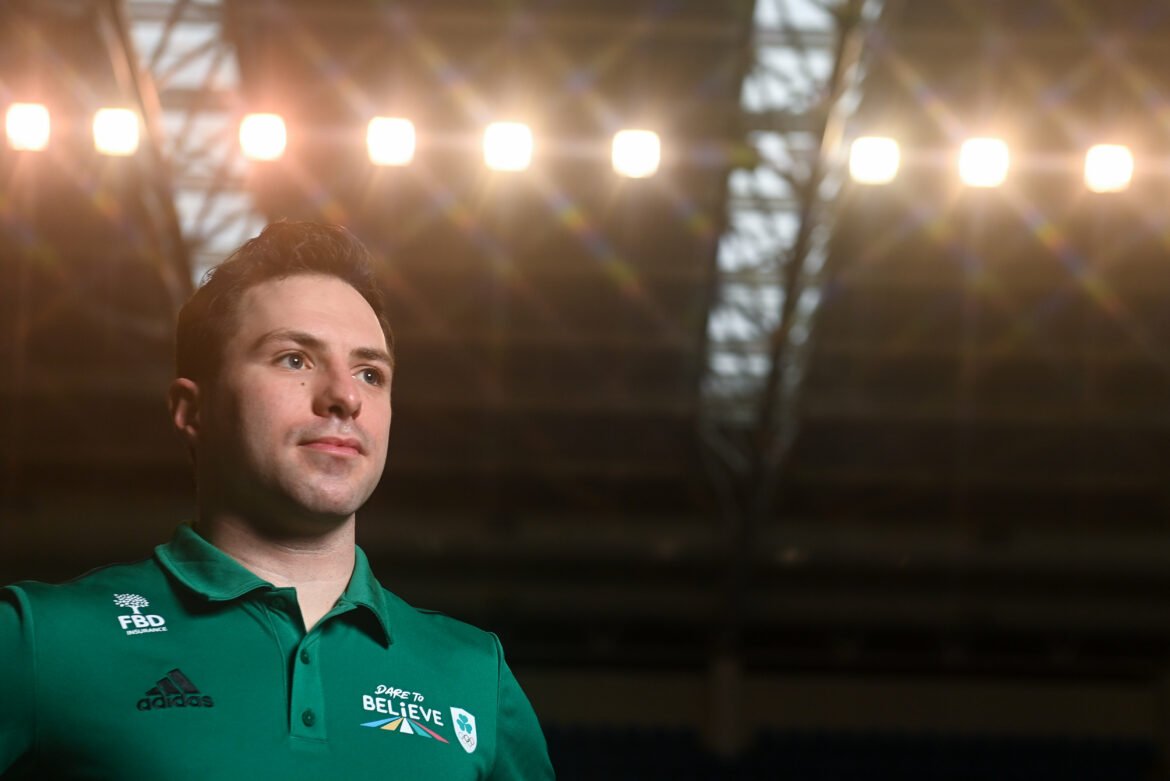 NAC diver Oliver Dingley says he is one of the “lucky ones” as he still gets to train away in pursuit of his Tokyo 2021 dream at a deserted National Aquatic Centre.

When lockdown came, he was just a couple of months away from the qualifiers but has been on hiatus since a gala in Madrid in February.

His next chance at qualifying comes in April at the site where the Olympic competition takes place but formal warm-up competitions are few and far between for the time being with January and February’s schedule on hold.

It is an obviously frustrating situation but one he feels could be far worse.

“Preparations are going fairly smoothly,” he told the Dublin Gazette at Team Ireland’s announcement of their newest Dare to Believe ambassadors.

“I am still lucky enough to train and to have a bit of normality in my life; I have family members who are struggling with their own work and my nan currently has the coronavirus.

“The extra year has given me a chance to step back and figure out how I can get better as an athlete for the Olympic Games. It is strange going to the NAC and there are only a handful of us there. My schedule is fairly strict and normal and, if anything, I have been able to make some gains.”

To that end, the break in competition has given him some intense practice time to work on upping the level of difficulty in her armoury.

“They are all dives where you throw it out and hold on for your life! Front 4.5 somersaults; reverse 3.5 somersaults – all the high degree of difficulty dives.

“The goal is to have them on a consistent level so I don’t just pull it out for a semi-final; I want to have them as a minimum for a preliminaries so I can just land them on my head to get through.

“If anything does happen that I pick up an ankle injury, I will still have the other, easier dives that I can do consistently to get me through.”

Eighth in Rio in 2016, he is gearing up for his first competition of any description in December.

Typical of the modern era, it will be a virtual meet with each competitor, recording their dive at via a specific link, offering only one take to get it right, before submitting it to be marked by judges.

Once all clips from around the globe are submitted, they will be collated on Youtube with the end result unknown until the very end.

Given the circumstances, he is well aware the Games will be a far cry from Rio, too.

But while he embraced every facet of his maiden event of this magnitude four years ago, from the opening ceremony to mingling in the Olympic village, he is not overly concerned that this summer’s event will be less of a carnival with restrictions in place.

“It’s a sporting event where you want to be the best in the world. To be able to stand on an Olympic diving board representing Ireland is the dream.

“I have been lucky enough to do it once and I really hope to get to do it again. It won’t change things for me; it will still be special.

“It takes a team to get you there and we can still all share that moment, maybe via TV.

“I reckon when I look back on it, it will be amazing to see how sport got over these challenges to make it happen.”

** Oliver Dingley was speaking at the launch of the Olympic Federation of Ireland’s ‘Dare to Believe’ programme, which also saw FBD Insurance unveiled as the official programme sponsor. ‘Dare to Believe’ will see 25 Irish athletes visit schools across Ireland, telling their own personal and sporting stories and teaching students how to set goals and adopt healthy lifestyles through participation in sport.

The programme highlights the Olympic and values of respect & equality, healthy mind and body, joy of effort and striving for excellence, in order to inspire the next generation of Irish Olympic athletes. You can find out more here: https://www.daretobelieve.ie/

Morris vows to rebuild at Shels