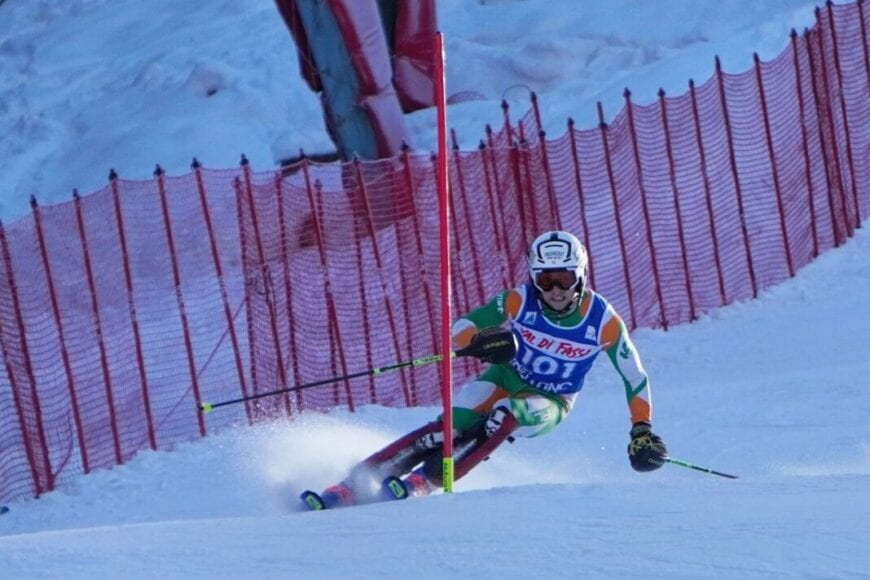 From sleeping on bus station floors in St Moritz five years ago and lugging his kit on foot around Europe’s ski resorts to save a bit of cash, Cormac Comerford is grateful such hardships are well in the rear-view mirror ahead of this weekend’s World Championships in Cortina d’Ampezzo.

The 24-year-old Glenageary native’s season ramps up in Thursday morning’s giant slalom qualification run and Saturday’s slalom, hoping to make the cut for the following day finals each time.

“I’ve had the best preparation of any season,” he told the Dublin Gazette. “I started training in July, already after the main lockdowns were lifted and I’ve been out in Europe pretty much since then.

“I finished last season off quite strong. And I just wanted to build on that and, so far, my form has been in a much better place.”

It led to a couple of podium finishes just before Christmas in Italy while other events provided high-class, “super-stacked” competitions.

With numerous events cancelled, it has led to many top athletes contesting a smaller number of competitions, making the pursuit of ranking points for the Beijing 2022 Winter Olympic Games a hard-fought endeavour.

Such a level is exactly what Comerford has craved since happening upon the sport as a nipper, almost instantly becoming hooked.

“They had an open day up in Kilternan; I think it was during Oktoberfest. We didn’t even plan on going skiing at all. My mother’s friends were up there so we just went up to have a look.

“They convinced us to put on some long sleeves and give it a shot. And I just got obsessed and addicted right then and there.”

Within two years, he joined a race squad and was taking part in whatever carving clinics and specialist training was on offer while 2010 Winter Olympian Shane O’Connor was an early inspiration.

“Whenever he was coaching at the Ski Club of Ireland, I was dying to see him. I was always asking when is he coming back up coaching. And when I saw him at the Olympics, then that was kind of the trigger for me. That’s where I wanted to go!”

The club helped Comerford progress to international races on the dry slopes in the UK and then further afield, fuelling his desire to push as far as possible to see where the journey could take him.

But the costs of moving on to the next level in skiing can prove exorbitant and the constant jostling between ambition and what was affordable brought him to the brink of knocking it on the head.

“Towards the end of school, when I was about 18 years old, there was no funds left. It was right after an Olympic cycle so there was even less funding from governing bodies [than usual] and the recession had kind of hit my family a bit later on. I was scraping the bottom of the bucket.

And yet, from that brink, he produced a “momentous” 49th place finish, showing what could be achieved on a shoestring.

“I had struggled for a long time to come up with funds and keep my career alive. So that World Championships represented everything I’ve worked for to be able to continue skiing because before that, I was on the brink of giving up and finishing my career.”

With it also came increased support. TU Dublin offered him a sports scholarship on a par with others in the college and that faith was rewarded with a 42nd at the 2019 World Championships.

“We were at our base in in Kronplatz [in South Tyrol]. Half of our team ended up getting Coronavirus as well as the staff in the hotel, completely unbeknownst to us.

“One of our teammates was saying I can’t smell anything. Loss of smell wasn’t a symptom at the time. So we all found it very strange. But then a couple of days later, everything came to light! I was so lucky; I tested negative three times and jumped back home and then isolated for two weeks at home.

“In the end everybody was healthy and safe. But yeah, it was a wake up call right at the end of season one. We were just hoping to finish off some races at the time.

“Even the doctors that came to test us. They were also not really sure of the protocols at the time. And it was changing hour by hour. It was nerve-wracking. Looking back on it now, we’re so much better prepared and capable and able to handle these kind of situations now.”

He faces this phase of the push for Beijing in a much assured fashion with the newly rebranded Olympic Federation of Ireland – with O’Connor a key advocate in the body –  on board to offer real assistance in recent years along with FBD Insurance.

“There has been a revolution for Snow Sports in Ireland since the new Olympic Federation of Ireland has come in. They’ve really put an emphasis on having equal opportunities for athletes across all sports.

“Even though it’s not a big sport [in Ireland], we have athletes that are pushing just as hard to reach high levels as in any other sport. They highlighted the importance of that and it’s put snow sports in a fresh new light.

“People appreciate that it brings the same value, overcoming the challenges and obstacles and learning from that.

“I am really well supported now by TU Dublin for my training equipment as well as the Snow Sports Association this year. Yeah.

“The OFI and FBD have also been really amazing with what they have put in and supported me on my journey towards the Olympics, trying to be as competitive. I’m just really grateful for that, pushing every day to make the most of it.”

** Tune into Eurosport or check the live timing onFIS ski