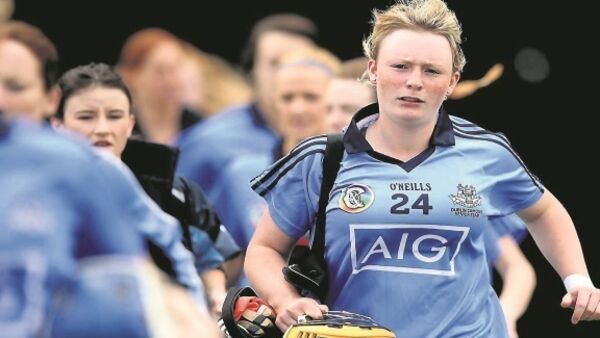 A late, late point from Niamh Rock rescued a dramatic draw for Na Fianna against Lucan at Mobhi Road in a thrilling championship opener.

Na Fianna’s Elyse Jamison-Murphy got the home side off to a fast start,  followed by another from her team-mate Rock.

Lucan’s centre forward Kate Whyte (inset) put her name on the score sheet with two frees in a row. However, Rock killed Lucan’s momentum with another point from the play.

Whyte added a point for Lucan as it was clear that she could not miss, but Niamh Rock scored a free just before the water break to put Na Fianna a point ahead.

Rock scored the first point from a free after the water break and Na Fianna closed the first half with points from Roisín Baker and Jamison-Murphy to go in three ahead.

Lucan responded after the restart with points from Whyte and Ali Twomey, and the sides were level going into the final 15 minutes.

Na Fianna had a purple patch once they returned from the water break, and two 45s from Rock led to Na Fianna winning a Lucan puc out giving the ball into Jamison-Murphy who saw the back of the net.

However, that didn’t discourage Lucan as Ellen Dunphy scored an inspirational point which was followed by a goal from Michelle Kelly with Claire Rigney levelling the game in the 55th minute.

Na Fianna conceded a free in front of their own goal which was scored by Whyte, but just when it looked like it was all over for Na Fianna Rock abggerd a late equaliser.

Lucan’s Claire Rigney gets away from Orla Gray of Na Fianna during the sides’ draw. Photo: iLivephotos.com