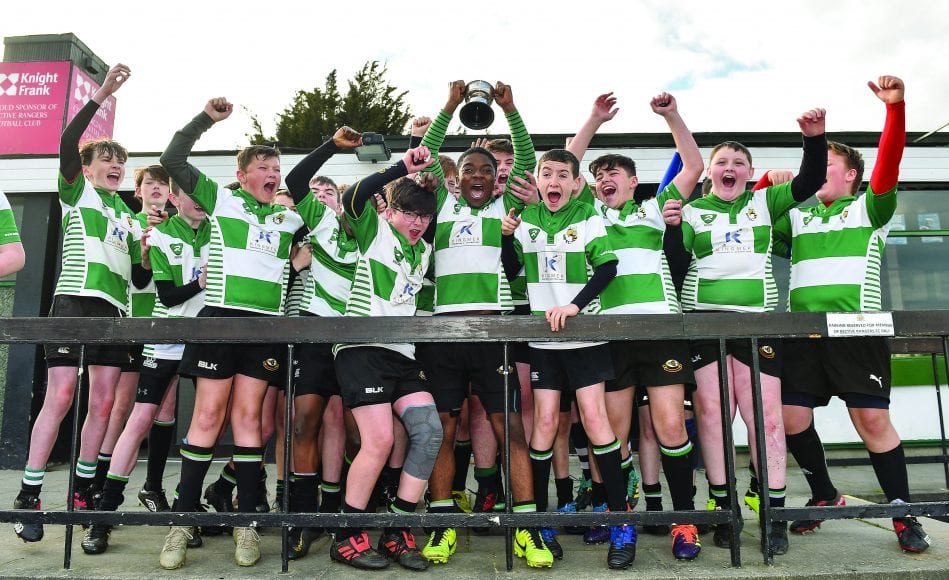 It was this team’s first ever title having lost narrowly in two previous finals but it proved to be third time lucky as they coasted to victory by a margin of 60-19.

Balbriggan had already played Cill Dara twice earlier in the season, once in the league and once in the cup with one win apiece from those encounters, both hard fought affairs and Sunday’s final was expected to be more of the same.

On the day, everything came together just right for the boys from the North County who put in their best performance of the season.

Many in this team have been there since the start of ‘Mini Rugby’, playing together since they were five or six-years-old, drawing players in from the town and surrounding villages and townlands such as the Naul and Stamullen while two players travel from Duleek each week. All attend non traditional rugby playing schools.

The team itself reflects the very diverse mix of nationalities in the community with players hailing from Russia, Poland, Romania, France and Greece as well as two Irish born sons of Nigerian parents, the club enriched by this diversity.

The final on Sunday was a great spectacle of open flowing rugby. Balbriggan were familiar with their opponents and were aware that Cill Dara were big, physical and extremely fast.

Balbriggan’s high tempo, pressure game worked a treat, closing down the Cill Dara fast men quickly, before they could get moving.

An early try set the tone and Balbriggan quickly opened up a 19-0 lead before Cill Dara managed to score.

The first half ended 31-5 with five tries and while the Kildare side came back in the second half with two converted tries, Balbriggan finished the stronger with another five tries.

They can now look forward to a well-earned break over the summer before the new season gets under way again in late August for the new season.