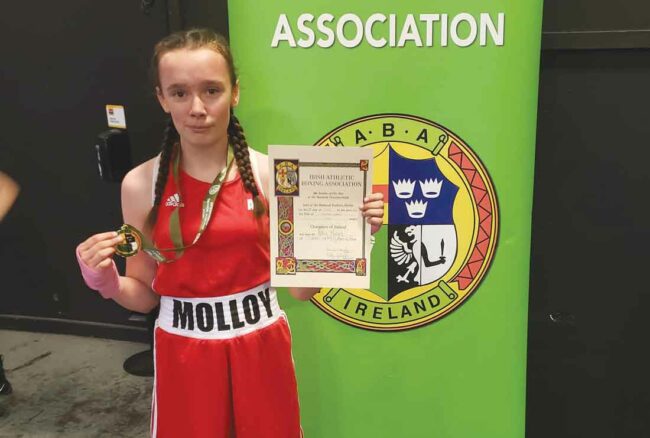 Six Dublin boxing teens will get the chance to represent their country on the international stage this summer after a crisis was averted last week.

The young talents were among 29 National Junior Cadet champions told that a place on the Irish team to compete at the European Schools Championships came with the Irish title they won last month.

However, after a summer spent preparing, they nearly had their continental adventure snatched away from them.

The IABA last week contacted clubs revealing they were struggling to find the funds to send a full team to Erzurum, Turkey where the tournament will be held between August 10 and August 21.

However, within days there was a turnaround and the IABA confirmed a full team would be sent, meaning 13 female boxers, and 16 male boxers, all aged 13 and 14, will look to add to Irish boxing’s medal laden 2022 next month. Of the 29 European Schools’ competitors and international debutants six are Dubs. Tallaght Club Sacred Heart has the honour of having two fighters picked.

Abbey Molloy (inset), who scooped her first National crown when beating Kirstie McDaid of Phoenix BC for the Junior Cadet 42kg title, will compete on the European stage alongside clubmate Brandon Geoghegan.

Geoghan, a fellow first-time National Champ in June, will be Ireland’s 50kg representative in Turkey.

Kileen earned her place on the team after she defeated two-time national champion Megan Dagg from Enniscorthy in last month’s Junior Cadets and now wears the international singlet at 57kgs.

Abuduoire also dethroned a champ to earn his Irish title and shot at 63kg Continental honours. Jobstown head coach Amanda Spencer has also been selected as a coach, increasing the Tallaght representation at the tournament.

The latest fighter off the Crumlin BC production line, Robyn Caryle will finally get her chance to impress on the international stage. Carlyle is a three time Irish champion, winning his third title via first-round stoppage in June, and will attempt to add European silverware to her sparkling collection when she competes in the 54kg class next month.

Rocco claimed a third title of the season in June, adding Junior Cadet honours to the Dublin and National Boy 1 crowns he collected earlier this year. He now  has the chance to make it four major successes in less than six months in Turkey.