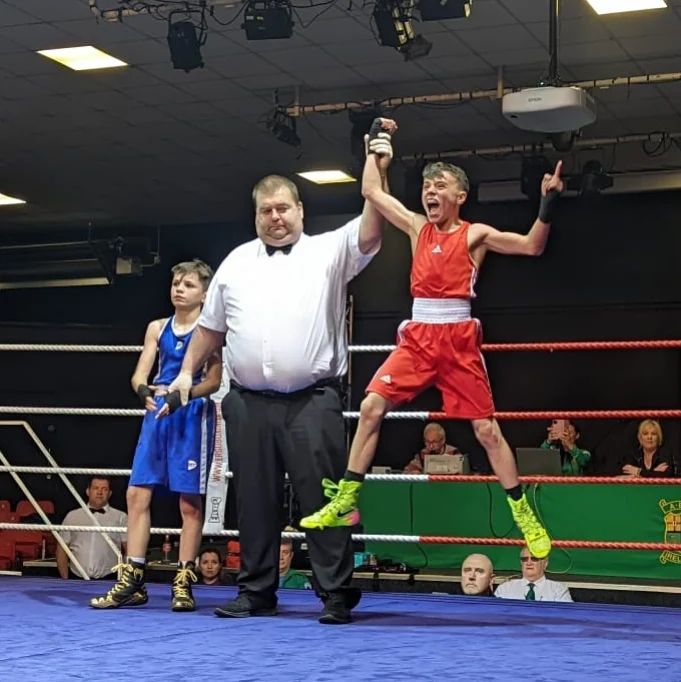 ‘Little Naz’ Kristan Jubani showed just how much Irish title success can mean to a young fighter when he flirted with breaking the Irish high jump record in the National Stadium on Sunday.

Another Crumlin Boxing Club success story, Jubani was one of 39 new champions crowned after six days of National Junior Cadet Championships and one of nearly a dozen delighted Dubs on finals weekend.

Jubani was the lightest of the eleven capital winners as he claimed a 5-0 unanimous points win over fellow Dub Mikey McDonagh.

Kurt Kinsella is the latest champion of the Monkstown production line thanks to a 3-2 split decision win over Tommy Fitzpatrick of Marble City in 38.5kg decider.

Brandon Geoghegan registered his second Irish title in win this the year on Sunday, the Sacred Heart fighter defeating Ritchie Gentle of Phoenix in the 50kg final.

Similarly, Rocco Dempsey, of Dublin’s oldest club Avona, continued his sensational streak and claimed a third title of the season, adding Junior Cadet honours to the Dublin and Boy 1 crowns he collected earlier this year.

Robyn Carlyle of Crumlin and Faith Kileen of Jobstown also won titles on Saturday, Carlyle outpointing Ellie Fenlon of Paulstown at 54kg and Killeen defeating Megan Dagg of Enniscorthy at the weight above.

Tallaght’s Abbey Molloy and Broderick Aduire both took the short route to victory. Molloy won the 42kg in the crest of Sacred Heart by RSC in round 2, Jobstown’s Adbuire won in the same manner but a round later in the 65kg final.

Fifty new roles to be created in Dublin this year