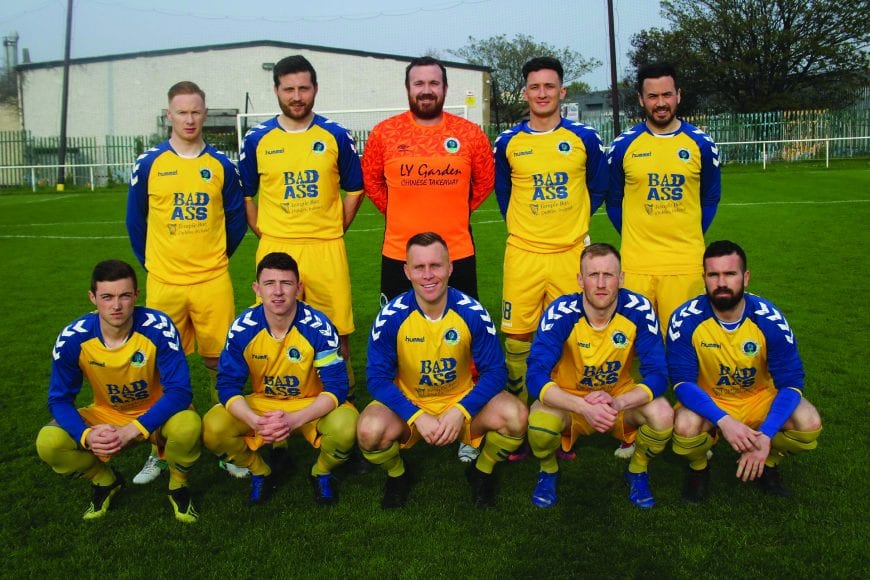 Bluebell United set up a mouthwatering Metropolitan Cup final with Crumlin United after beating local rivals Collinstown at the SDFL in Lucan on Monday night.

The two most successful sides in amateur football over the past decade – the newly-crowned champions and the Bell, who’ve won three in five – will meet on Friday, May 31.

Second-half goals from Sean Byrne and Gary Seery saw the Bell to a victory that manager Andy Noonan admits wasn’t as clear-cut as it appeared.

Collinstown – watched on by a large crowd who made a hostile atmosphere for the visitors – play three leagues below Bluebell but more than matched them until the second half.

Bluebell played into strong sunlight in the first half and were caused problems by Collinstown’s pace and relentlessly high tempo.

They went in at half-time knowing they were in a game, but they got their noses in front shortly after the break when Sean Byrne headed a cross past Declan Woods.

And Ireland junior international Gary Seery wrapped up the win when he sprung the offside trap and kept his composure to slot home the second.

“It was a well-contested game,” Noonan tells the Dublin Gazette.

“The support they have in their community is unbelievable. They must have had 4-500 people up there and the minority by far was Bluebell.

“It’s very much a testament to Collinstown as a local club, spearheaded by Stuart Goodall and Kevin Carroll the manager.

“Great football men that seem to have tapped into the community spirit. I haven’t seen a crowd like that in a long time in a junior match, and I was delighted to be part of it.”

Collinstown shocked Killester Donnycarney – who finished one spot above Bluebell in the league – in the last round and knocked St Mochta’s out of the FAI Senior Cup.

Those results – and three promotions in three seasons since moving to LSL – meant Noonan was never going to take the Neilstown side lightly.

“They have some great players there that have played, and still can, at a much higher level than they are. Collinstown are definitely on their way up to the first senior division.

“Collinstown started like a house on fire. It was relentless, a testament to their fitness at this stage of the season that they kept it up.”

The fact Noonan knows Crumlin and manager Martin Loughran so well means, if anything, he’ll find it easier to prepare for the final than the unknown quantity in Collinstown.

“The Metropolitan Cup is the biggest LSL cup. The last couple of years, for whatever, the Senior Sunday sides haven’t really fared well in it.

“Ideally, the last game of the season I wouldn’t have liked that will test us as much as Crumlin will. But we’ll test them too and I think Martin [Loughran] would say the same.

“Crumlin deservedly have won the league. We would have liked a handier team in the final, but it’s a good way to draw the curtain down on a long, long season.”

The Wedding Present take a glance at the past, 34 years on