Dublin’s camogie stars continue their strong run in Group B of the Dublin senior camogie championship as they beat Wexford by four points, making it three wins out of four.

The sky blues would ordinarily go into the tie as underdogs but strong wins over Offaly and Meath had them in good shape while Wexford have been off colour in the competition, losing all of their games to date.

They did, however, win the first half battle, reading the game exceptionally well and taking some fine long range scores from the speedy Chloe Fox.

Despite being behind by three points, Dublin continued to push forward with some brilliant high catches and lovely side steps and pace shown by Ali Twomey and Orla Beagan. 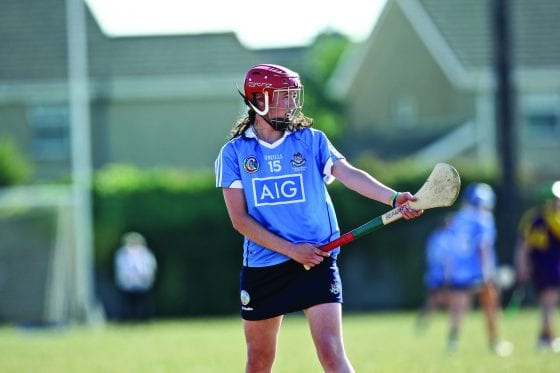 It was Naomh Mearnog’s Laura Twomey in the back line who, once again, displayed incredible sheer grit, breaking two hurls in tackles and showing her accuracy through some excellently delivered diagonal balls.

There were moments of play where the crowd were reminded that Wexford where in fact three in-a-row All-Ireland champions in the past. But Dublin were still yet to increase the tempo, intensity and skill level.

Gráinne Quinn and young Niamh Gannon were introduced after a fine display last weekend against Meath.

Frustration was seen on both the Wexford players and management faces due to the support play shown from Dublin which was pure bliss.

The opposition struggled to keep up with the blue jersey resulting in fouls left right and centre.

Stacey Kehoe and Linda Bolger made it a game of tit for tat and it was sensed that what would break the two sides would indeed be a goal.

Luck found it’s way to the girls in blue when, in the 42nd minute, the green flag was raised after a long rage free from Beagan skimmed past the keepers hurl and found the back of the net. The score now stood Dublin 1-8 Wexford 9 points.

Dublin would need to keep their tally up and with two vital points pinged over the bar from the half way line from goalkeeper Faye McCarthy and they would continue to strive forward.
Kehoe slotted two fine points over the bar during pivotal times in the game along with Ali Twomey, who was exceptional throughout.

To ensure a convincing win, manager David Herity called upon Leah Butler and Sile Ní Coitir to finish the game off.

Basketball to increase presence in South Dublin with...

Carroll back on the frontlines in Beaumont and...

Fiorentina’s Quinn back on familiar turf in Champion’s...