St Kevin’s Boys star Roland Banya found the back of the net to help the DDSL side walk away from the University of Limerick as Kennedy Cup champions for the 31st time.
Banya was joined by Kevin’s teammates Bosun Lawal, Gavin O’Brien, Len O’Sullivan and Conan Noonan in the squad who defeated Sligo/Leitrim 2-0 in the final.
Banya gave DDSL the lead after just four minutes when he picked up the ball on the right hand side of the pitch before cutting onto his left foot and giving the keeper no chance with a curling finish that looped over the despairing dive of Kayle Wasjszczuk in the Sligo/Leitrim goal. 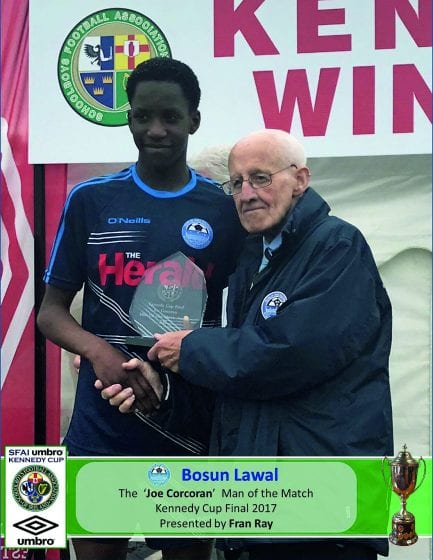 St Kevin’s Bosun Lawal receiving the player of the final from Fran Ray,

They went 2-0 up before the break thanks to an own goal after Ben McCormack’s attempted cross was deflected past the keeper.
DDSL manager Garreth Dodrill spoke after the game at his delight with the effort his players put in throughout the week – especially considering the expectations the team has to deal with.
“It’s quite tough because you are expected to win it and when you win it, everyone thinks you should be winning it anyway so you’re in a bit of a no win situation,” said Dodrill.
“I was down here five years ago so I knew what it was about and the boys were told what to expect from other teams and to be fair to them they took everything onboard. They behaved themselves around the place and put the effort in.”
Sligo/Leitrim were impressive throughout the tournament but couldn’t handle the efficient DDSL.
“We were expecting what the game was. They have a couple of nippy players up front and their number eight in midfield was outstanding – one of the players of the tournament – and the three players at the back were solid enough.
“We spoke to the boys and told them they would get some joy down the wings. We needed a nice early goal just to settle the nerves and prevent them from getting their tails up. Thankfully we scored after a few minutes and got the second one then to calm the nerves,” Dodrill continued.
The manager also praised his coaching staff for the work and commitment they have put in over the last few years to help get them where they are today.
“This process started for us three years ago and it’s a difficult process because we have to whittle down players.
“It’s a huge commitment from everyone. It’s every Sunday morning for the last three years, some midweeks, games, and friendlies so it’s a lot for all the coaches to put in and for our families to put up with us being out of the house all the time.”

Morris takes positives as Shels back in big...

NAC Masters for tenth year in a...

30/01/2014
We use cookies to ensure that we give you the best experience on our website. If you continue to use this site we will assume that you are happy with it.Ok