Paddy Power Comedy Festival kicks off with a bang! 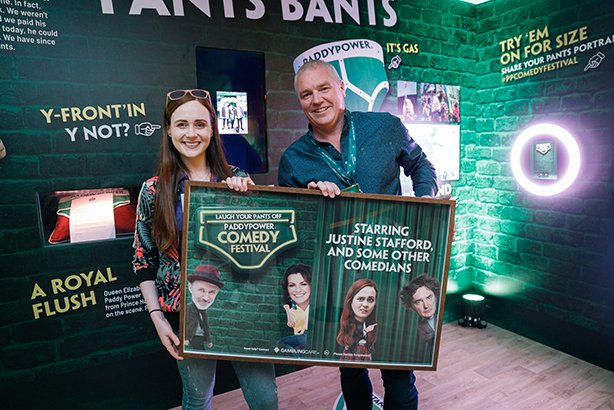 Last night, in a sold out Iveagh Gardens, the Paddy Power Comedy Festival kicked off with a bang, back for the first time since 2019! Over 90 artists will perform 36 shows in four fully seated venues in the stunning city centre walled gardens until this Sunday, 24th July.

9.30pm shows included Jason Byrne on ‘The Bleedin’ Massive Stage’, Tony Cantwell in ‘The Craic Den’, Enya Martin at ‘The Only Joke Inn’ and The Comedy Crunch performed in a packed out ‘The Free Gaff’.

As a new sponsor, Paddy Power wanted to support to some of the talented Comedy Clubs across Dublin and so ‘The Free Gaff’ stage was born. On each day of the festival, local comedy clubs will be hosted as part of the programme on this stage, and for every ticket sold for The Free Gaff stage featuring a ‘Comedy Club’, Paddy Power will match its price in funding for that comedy club.  This will allow those clubs to finance more gigs, creating more opportunities for aspiring comedians to perform and hone their talent in front of a live audience.

For full details of the Paddy Power Comedy Festival line-up, programme information and to buy tickets (if there are any left!), visit https://PPComedyFestival.com

‘Turn Back Time’ with Cher at Bord Gais...

A Fiesta of Flavour at Bewleys

Páipéar – an exhibition not to be missed