The demolition of Apollo House started this week, almost a year on from the Home Sweet Home occupation. 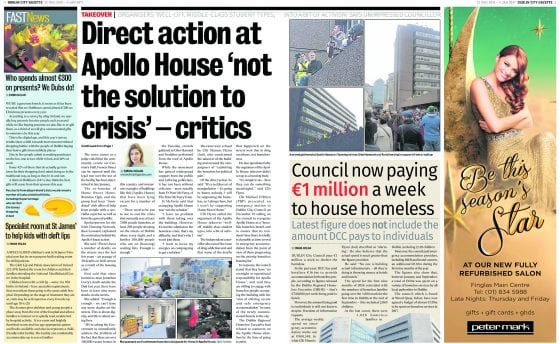 Some of our own coverage of events at Apollo House last year, when the eyes of the country were trained on the landmark. One year on, however, and the national homelessness crisis is even worse …

Replacement
The building is being redeveloped by Nama-appointed receivers to developer Garrett Kelleher’s Cuprum Properties Ltd, while the Office of Public Works is responsible for the replacement of Hawkins House.
The occupation of Apollo House caused a media frenzy last year, as a group of activists including some well-known musicians, such as Glen Hansard and Damien Dempsey, took over the building to provide shelter for some of Dublin’s homeless.
They were met with praise and criticism alike at the time, with homeless charities Focus Ireland and The Peter McVerry Trust labelling the move as “not the solution” to the housing crisis, but the campaigners still received multiple donations in food, money, mattresses and other supplies from supporters. 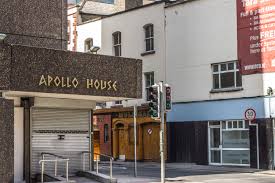 A year on, however, and the homelessness crisis is worse than ever, as 89 families became newly homeless in Dublin in September alone, according to Focus Ireland.
The most recent figures show there are now 1,455 families and 3,124 children homeless nationwide in Ireland – meaning more than one in three people experiencing homelessness is a child.
Some 806 young people aged between 18 and 24 are also homeless, according to Focus Ireland.

Byrne to negotiate with Crank

Digital hub or dead duck? What to do...

Six burglaries in the space of 3...

30/05/2019
We use cookies to ensure that we give you the best experience on our website. If you continue to use this site we will assume that you are happy with it.Ok