Roll up for the revolution

A FLY-ON-THE-WALL documentary about women’s roller derby in Ireland is already causing quite a stir ahead of its release this weekend.
In ‘Revolutions’ Laura McGann follows fledgling teams in Dublin and Cork for four years as they commit to the challenges of a gruelling full-contact sport.
The film starts with Dublin Roller Girls’ player Zola Blood, from Tallaght, admitting: “I’ve always been confident, even as a child. I’ve never been someone to shy away from anything.”
Jemma Flynn, aka Zola, said: “The film for me felt like years of my life. She travelled around with us, was there for all the barneys. She probably knew better than anyone what was going on.
“The only thing I was worried about was coming across as a bit of an idiot. I’m a bit of a show-off on track.”
You don’t have to be an extrovert to play, but it helps, and most of the women skate under alter egos – Jessica Rammit, Pippy Strongstocking, Jane Crow. 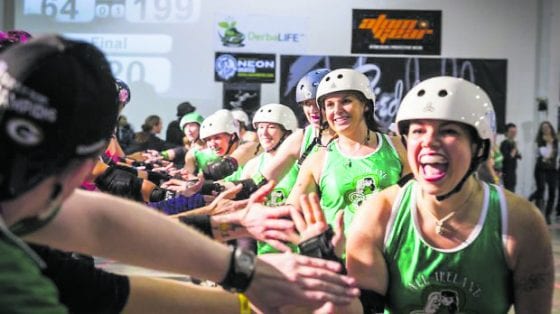 Jemma, whose skate name is based on her athletics track hero Zola Budd, said: “My friend Lisa got me into it when she saw a video online.
“I liked to skate and I’d done kickboxing so I said ‘I’m totally doing this’. Because it was all women it was very empowering. I loved it from the very first session.
“It’s very physical. When people come in who haven’t played a contact sport before they’re not sure. Then they feel great when they are able to get up after being put down.
“I broke one of my best friends’ ribs in training once, that was horrible. But I haven’t been too bad with injuries apart from tearing my shoulder muscle at the World Cup. Some people have had double breaks in their legs.”
Roller Derby is sweeping the globe since its revival in Texas over a decade ago. The fast-paced sport is played by two teams of five skating in the same direction around a track.
Each team designates a ‘jammer’ up front who scores points by lapping members of the opposition – while the ‘blockers’ try to assist and stop the competition.
It can get rough. At one point in ‘Revolutions’ DRG team coach ‘Violent Joe’ tells his players: “Don’t just nudge them, get in there and hit them.”
Mum-of-one Jemma, who was voted Most Valuable Player for Ireland at the Toronto World Cup, said: “You get hooked. It’s a great community of people and you feel a great sense of loyalty.
“I’d love to see it at the Olympics. If volleyball in bikinis can make it, I don’t see why roller derby can’t. It’s very exciting to watch.”

Revolutions goes on general release tomorrow, Friday. Tickets for the Irish Film Institute’s opening night screening of Revolutions on June 30 can be booked at http://ifi.ie/revolutions/.

A new home for Bow & Pearl

Call made for CCTV to tackle illegal dumping

Round Tower Heritage Centre is the ‘jewel of...

Man killed in N7 head-on collision has been...

Communion girl Carly thanks heroes who saved her...

New short film is the Cherry on the...

12/09/2019
We use cookies to ensure that we give you the best experience on our website. If you continue to use this site we will assume that you are happy with it.Ok