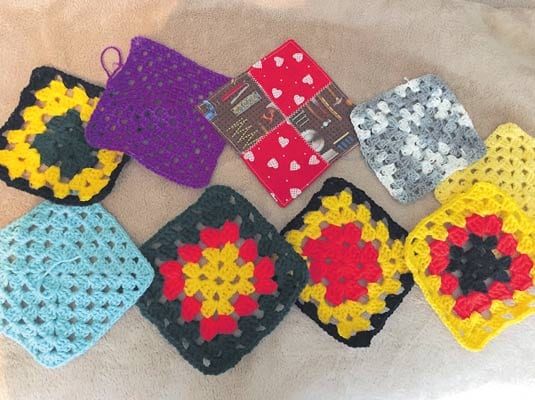 Lucan residents are uniting to create a “Blanket of Love” for a young boy who is suffering from a rare degenerative condition.

The disease, which has no cure, affects motor functions and can lead to a loss of hearing and sight.

Since Eoin’s diagnosis, the response from the community has been overwhelming, with a benefit night in the Lord Lucan on Friday night proving to be a huge success.

Eoin is a pupil of St Thomas’ JNS and parents from the school have decided to join together to crochet and knit a blanket to donate to him.

Maryline Waters, who came up with the idea told The Gazette that she wanted to do something that conveyed the love of the community for Eoin and his family.

She said: “I thought it would be nice to do something that wasn’t involving money but was more a symbolic way to wrap Eoin in the support of our community.”

People are invited to knit or crochet a six inch square to add to the blanket.

“The response has been great,” said Maryline.

“People that don’t know how to knit want to learn.”

Maryline added that she is happy to teach anyone to knit or crochet if they want to get involved in the project.

And she is keen to point out that people of all levels of proficiency are welcome to take part.

“You don’t have to be a genius, a basic square will do,” she said.

“It’s not about perfect artistic masterpieces, it’s about a labour of love.”

The group will also be personalising the blanket with some of Eoin’s favourite things.

“His favourite colour is red and we have a few cartoons he likes too,” said Maryline.

Maryline said that she hopes to complete the blanket by mid-July.

Anyone who wishes to contribute a square can find more information on the A Blanket of Love from Lucan to Eoin Facebook group.

Eoin’s condition is deteriorating rapidly and he now relies on a wheelchair and requires full assistance for his needs.

His family are currently trying to raise funds to help pay for his care.

Anyone who wishes to donate or help in any way can do so through the website.

Eoin’s mother Avril contacted The Gazette to express her gratitude to the community, in particular St Thomas National School, Scoil Aine, Adamstown Educate Together, The Lord Lucan Pub and the staff at Finnstown Pharmacy.

Neglected horses left to die on side of road