Families under threat of homelessness

The Campaign for Public Housing held a protest at the Sheldon Park Hotel in Ballyfermot last Sunday to highlight the plight of 20 families under threat of homelessness at Larkfield House, Coldcut Road.

The owner of the Sheldon Park Hotel, Cavvies Ltd, is also the owner of Larkfield House.

Cavvies had received planning permission to build 27 apartments at the site but it emerged that the 45 apartments had been built.

An Bord Pleanala last week confirmed to Dublin Gazette that the appeal to build the additional apartments had been rejected. 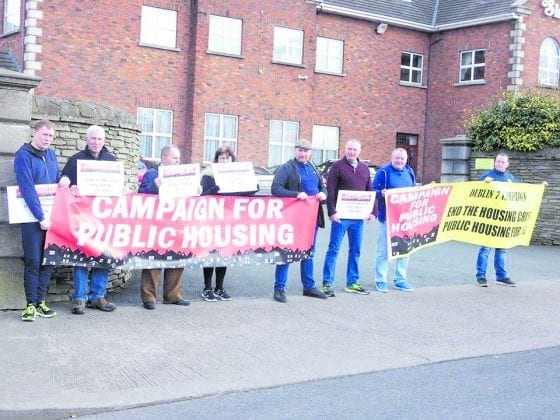 The council also recently confirmed that they were to inspect the original apartments due to planning and safety concerns.

The council has suspended paying Housing Assistance Payments to tenants at Larkfield House until the issues have been resolved.

Families were told last week that they would have to move out of the apartments that had planning permission rejected, meaning that many of them may be facing homelessness.

Speaking at the protest, South Inner City housing activist and campaign spokesperson Damian Farrell said: “Today’s protest was a continuation of the campaign of disruption promised by the Campaign for Public Housing. We are determined to target those who profit from the misery of homelessness.”

Campaign spokesperson Cllr Paul Hand added: “One of the directors of Cavvies Ltd., the company who built and let the Larkfield House apartments on Coldcut Road without planning permission, owns the Sheldon Park Hotel.

“We want his customers to show him that this carry on is not acceptable and will hit him where it hurts – in his pocket.”

Campaign spokesperson and East Wall community activist Joe Mooney said: “The purpose of our campaign is to ensure that those who are causing the housing crisis – government, banks, estate agents, developers and rouge landlords – are not allowed to continue with ‘business as usual’.

“While thousands of children live in emergency accommodation we will not allow the situation to be normalised.”

We contacted representatives of Cavvies Ltd for comment but had not received a response at the time of going to press.

Make it Malta for your marvellous family holiday

Ireland is getting its first nudist-friendly beach

Mobility Hub proposal up for consultation