CONCERNS have once again been raised about dumping at the bottle bank at Spar in Ballyowen.

Pictures emerged last week of a large numbers of bags of empty bottles left beside the bottle banks, which were full.

The bottle banks have since been emptied but locals said that incidents such as this are becoming a regular occurrence and have urged South Dublin County Council (SDCC) to initiate more frequent collections.

Locals took to social media to vent their frustration at the situation. One local wrote: “This seems to be a regular occurrence, it needs to be collected more regularly. It’s an eye-sore. This not how Lucan should look.”

There were also calls for additional recycling centres in the area to prevent overflow situations.

SDCC confirmed that they are reviewing the operation of the bottle bank. A council spokesperson said: “The level of usage at this facility is high. It is now evident that there is a need for re-evaluation of the location.

“The schedule for cleaning around the recycling facilities is for three times weekly by council personnel – on Mondays, Wednesday and Fridays. 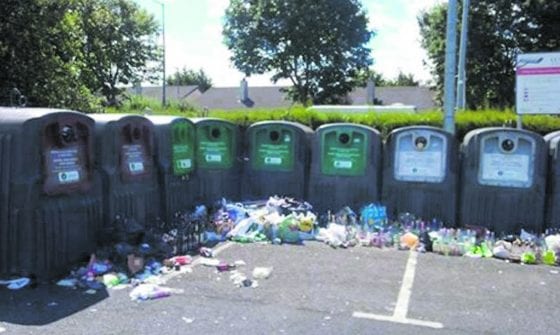 “In recent times they have also been attended to on Saturdays. The facility is cleaned once on each occasion.

“There is evidence that visitors to the facility are leaving bottles on the ground when the banks are full, and there is also a problem developing at the textile receptacles which are attracting dumping of household goods, furniture, and other non-recyclable clothing items.

“To address the immediate problems, we will be requesting the contractor to provide for more regular emptying of the bottle banks and we are also considering the potential to have the textile receptacles removed.

“It seems that the county is reasonably well covered by textile/clothing recycling points both on public and private property, and similar problems to which are being experienced at Ballyowen abated at other locations when such banks were removed.

“I can confirm that CCTV [cameras are] operational at this location which is used to monitor the site. However, due to the positioning of some of the receptacles, all activity is not captured.

“To address this, we are examining the scope to reconfigure the layout of remaining receptacles.”

Lucan physio is rewarded for her groundbreaking...

27/02/2020
We use cookies to ensure that we give you the best experience on our website. If you continue to use this site we will assume that you are happy with it.Ok