The thugs’ handiwork includes phallic symbols and vile messages and the new pathways – installed after considerable lobbying of Fingal County Council – will have to be redone.
Nurse Karen McQuaid, who regularly visits her dad’s grave in the cemetery, said those responsible should be ashamed of themselves.

She told the Dublin Gazette: “To draw a picture of a penis like that, it’s just disgusting. I don’t know what’s wrong with these people to feel the need to do that in a place where they should have the utmost respect.”

Karen, whose family have lived on the peninsula since the 1960s, called for action to deal with a spike in anti-social behaviour and admitted she no longer feels safe visiting the graveyard alone.

She said: “There were gangs of up to 30 of them hanging out there during the summer, bringing bags of cans (of beer) and playing loud music.

“I felt intimidated and threatened. You shouldn’t feel like that when you’re going to visit a loved one’s grave. I grew up here but now it’s ruined, it’s like they’ve no respect.
“My elderly mother still lives in Portrane and she does not feel safe going out to the shops. There are gangs of them deliberately blocking people’s way.

“The graveyard is in off the road and quite isolated so if you were attacked nobody would know or nobody would hear you scream. I won’t visit alone any more.”
Cllr Adrian Henchy (FF), who campaigned long and hard for the paths to be upgraded and repaired, also voiced his disgust.

He said: “Donabate Cemetery is a special and sacred place literally located in the very heart of our community. Every family on the peninsula has some connection with family, relatives and friends who are in their final resting place there.

“Trespassers to the cemetery overnight sabotaged the concrete pours and also thought it was a smart idea to desecrate the footpaths with some vile and disgusting graffiti. This is disgraceful and totally unacceptable.” 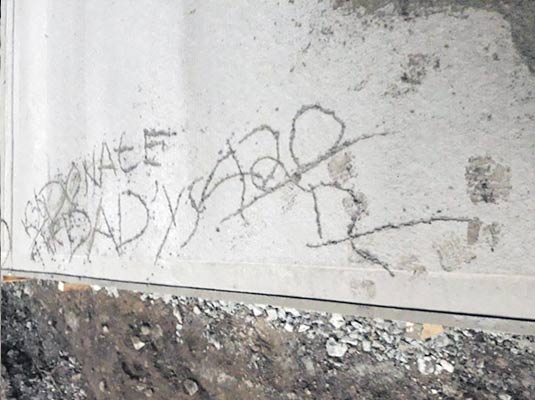 He pleaded with those “hanging out” in the graveyard to stay out of it and show respect for council workers who will re-do the work over the coming weeks at “considerable cost”.

Radio Snowflake website get over 100,000 hits in first week.

MetroLink must not be scrapped

Metro North proposal is back on track...

20/06/2019
We use cookies to ensure that we give you the best experience on our website. If you continue to use this site we will assume that you are happy with it.Ok