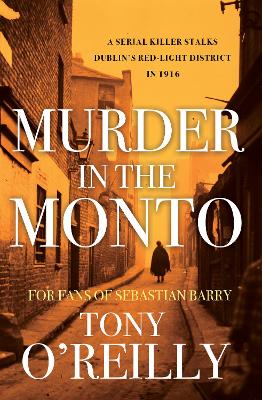 When Dublin author Tony O’Reilly was too late to sign-up for a French night course, he ended up in a short-story writing class that began his journey to “the Monto”.

“You may have heard The Dubliners belting out the refrain ‘Take Her Up to Monto, Monto, Monto’ but what, or where, was Monto? And why would you want to go there. My own search to discover my grandfather’s story led me both to the Monto and also to my debut novel”, Mr O’Reilly said.

The Monto provides the setting for his historical thriller, which is set in the weeks immediately after the 1916 Rising. The main protagonist in the novel is loosely inspired by the early life of his grandfather, Christopher Flinter, who was born in the Liberties of Dublin in the 1890s and later joined the British army.

While researching the book, he discovered that much of Christopher’s family died of tuberculosis, leading him to move in with Mrs Sherry on Francis Street. Inside that tenement building, he slept on a landing with his brother Ned, which drove him to the recruitment office in Portobello Barracks.

“Dublin at the time counted about 250,00 inhabitants, with 26,000 living in tenements in deplorable conditions who were more concerned with surviving than politics. Add in other sections of the population, such as British soldiers and their families, crown civil servants, local council officials, the Dublin Metropolitan Police and the business class, and you can see why the seemingly hopeless uprising was considered inconvenient”, the author explained.

At the turn of the 20th century, the Monto, less than one mile square, was the largest red-light district in Europe, “roughly in the area bounded by Talbot Street, Amiens Street, Gardiner Street and Gloucester Street, (now Sean McDermott Street)”, the author estimates.

The Monto thrived from 1860 until 1925, when the Legion of Mary’s Frank Duff finally had it closed down. It was a source of embarrassment to the new Irish and mainly Catholic state and has been largely forgotten in the years hence.

“The only evidence of its existence now are the few remnants of physical buildings scattered around the area and, of course, George Hodnett’s hit song, ‘Take her up to Monto’ belted out by The Dubliners”, concluded the ‘Murder in the Monto’ author.