Top Posts
Dig Deep, Remain Steady: Mary Lou McDonald speaks...
The Liberties say farewell to comedian Brendan Grace
Some of the world’s biggest acts to hit...
We’re Confused Too: Dublin Gazette dragged into Election...
Win tickets to Coldplay at Croke Park #NOW...
Wines for your wedding – Why It’s Wise...
When Deciding And Doing Goes Hand-In-Hand
Anorexia And Bulimia Not The Only Eating Disorders
Janey Mac, I’m getting married!
Gaels Don’t Want To Create A Storm On...
Aisling wins €15,000 and the chance to have...
Woodbine Park Post Office Closing Its Doors
Strong Opposition To Privatisation Of Leisure Centre
Boden Power through go ahead Senior Hurling Championship...
Peter ‘Franc’ Kelly On What To Do When...
South Dublin This Week

South Dublin communities rallied on Saturday to hold a protest march against a road closure in their locality.

Edmondstown Road in Rathfarnham, dubbed the “gateway” to the Dublin Mountains, was closed by South Dublin County Council (SDCC) in November 2017 after illegal excavation works on lands bordering the road compromised the stability of the stretch of road.

Around 350 frustrated locals turned out for the protest calling on SDCC to repair the road immediately.

Local residents said as a result of the closure, they have to make lengthy detours daily and emergency services have experienced severe delays in reaching emergencies in Rockbrook, Cruagh and Tibradden. 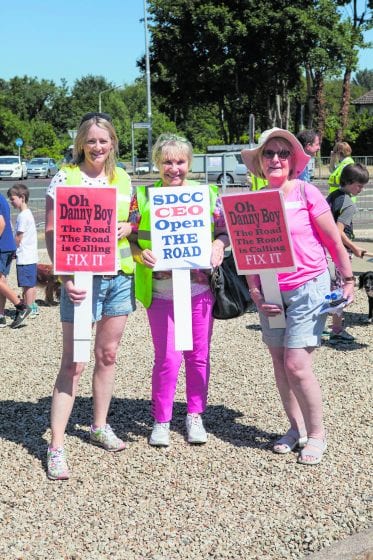 One of the organisers of the protest, Valerie Keogh, told Dublin Gazette there was a farm accident in early Spring and the ambulance was delayed in getting to the injured man by an hour because “the ambulance did not know the road was closed.”

Ms Keogh said: “God forbid if there was a fire in the Dublin Mountains, how in the dickens could they get services up there really quickly? It’s just ludicrous.”

SDCC has commenced legal proceedings but Ms Keogh said the focus should be on fixing the road.

“What is perplexing everybody is why is the council is pursuing this before the courts before they have fixed the road. The road is a health and safety issue

“This road is a pivotal road. It’s the gateway to the Dublin mountains.”

Ms Keogh owns Tibradden Farm Cottages with her husband for the past 20 years and said the detours around the road closure is having a very negative impact on their business.
“This is really affecting us. We have people coming in, groups of walkers and tourists, and we’re losing them.

“When this happened first, we had Germans that were meant to arrive at 8pm, and they arrived at 4am. They drove to Blackrock and had gone to Walkinstown because they couldn’t get around the barriers. It’s chaotic.”

She also said the road closure is having a negative impact on local schools, clubs and other businesses who are having to take detours on “small rural country lanes and roads” which is very dangerous especially when they are meeting “agricultural trailers and tractors with loads of hay and loads of silage.”

“This road has to be fixed and opened as a matter of emergency. Lives are at risk. It’s health and safety,” said Ms Keogh.

Local TDs and councillors were also in attendance at the protest on Saturday and addressed the crowd echoing the call for SDCC to repair and reopen the road immediately.
John Lahart TD (FF) told Dublin Gazette he wants SDCC to pursue the court case and fix the road simultaneously. He is also calling on the government to step in and provide funding.

“The council didn’t cause this problem, but if this was any other major route in or out of the city I don’t see how the government would not bump up emergency funding to a local authority in order to remedy the situation. I don’t see why Edmondstown Road should be any different. 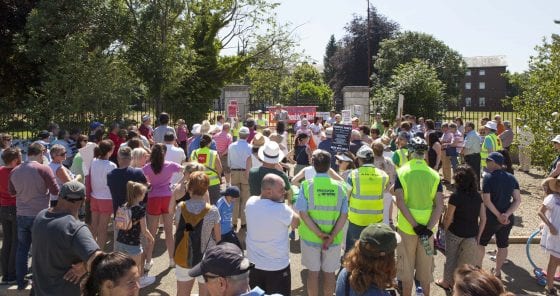 “The community may be rural but a huge amount of tourists use that road [and] thousands of Dubliners use that road to the mountains on a weekly basis.

“I don’t see why the residents in Edmondstown and in the Dublin mountains ought to have to accept this.

“I think at this stage the government should step in and provide the funding that is necessary for SDCC to undertake the work and allow the council to pursue the developer separately,” said Deputy Lahart.

Both the defence and representatives of SDCC are due back in the courts regarding the issue this week.

Dublin Gazette did not receive a comment from SDCC before going to print, however we have since received a reply which stated: “South Dublin County Council does not have any comment to make at this time.”

It’s all been plain sailing for Bill and Franny Fay