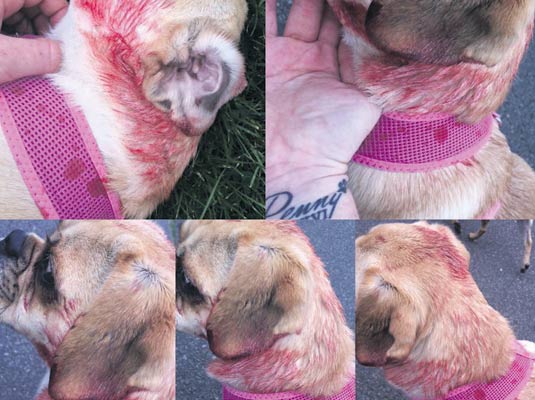 A BALLINTEER dog owner has described her horror after her pug was attacked with a firework while out for a walk last week.
Hannah O’Byrne from Ludford was out walking with her three dogs last Saturday morning when a firework was thrown and exploded beside her pug, Penny.
Penny was covered in blood and had to be rushed to the vet and is lucky to be alive, Hannah says.
“We were just walking along and I was picking up after my other dog, and just as I looked up there was a big bang and Penny was lying on the ground,” Hannah told The Gazette.
While she didn’t see the firework being thrown, Hannah says she saw three teenagers running away just as it happened.
During the panic, Hannah dropped the leads of her other two dogs, Miller and Miley, and they ran off.
“So I was in that situation of ‘Do I go after them, or go to Penny?’ I ran over to her and she was lying there not moving, blood everywhere. I just started screaming.”
Penny suffered a split ear in the ordeal and had to have the wound glued up at the vet.
She also had to have pieces of the firework removed from her eyes and mouth, and has also gone deaf in one ear.
Hannah said: “I get upset every time I think about it, it was just so awful. Every time I look at her, I nearly want to cry.”
Hannah shared the incident on Facebook and it has been shared more than 1,200 times: “She is very lucky to be alive.
“To the scumbags who launched the firework at my defenceless animal, you’re so lucky I didn’t catch you. Why harm an animal? What type of sick person would do that?
“I’ll never understand the actions of people that want to cause harm to other people, but especially cause harm to animals.”
She is keen to warn other local dog owners about the dangers of fireworks at this time of year.
“Where I live, there’s a lot of older people that walk their dogs and I would be afraid it could happen to them and give them a heart attack.
“I personally don’t like fireworks, but I have no problem with them if they’re in a controlled environment like on New Year’s.
“Penny is a perfect example of how precious life is. I know that’s corny to say, but my other dog Miley is so small, if the firework had gone off beside her it could have killed her.
“I could have been standing right beside her and I could have had my hand blown off.”
Although Penny is recovering, Hannah says her little dog is traumatised by the incident and won’t leave her side.
“We went for a short walk yesterday, and Penny was looking back at me every two seconds. She won’t leave my side. She’s deaf in one ear, but hopefully that won’t last for too long.”

Celbridge ‘will be ruined if new town centre plan goes ahead’