It’s all been plain sailing for Bill and Franny Fay

A Monkstown woman who met a US sailor in Dun Laoghaire are celebrating their 17th wedding anniversary this month.

Fran grew up in Monkstown and graduated from the London Montessori College of Dublin in the 1990’s with a degree in early childhood development.

In July 1996, Bill Tomaszewski, a sailor on board the USS John F Kennedy ship from the United States Navy, was on a trip to Ireland and docked at Dun Laoghaire.

On his last day there, he met Fran [Franny Fay] and recalls that they danced and laughed together until the ship sailed off the next morning. Fran stood on the pier and cried waving Bill goodbye. The next stop for the ship was England.

Fran worked two or three jobs saving up for her trips to the USA to see Bill. They wrote letters back and forth as much as possible by mail as they had no internet or cell phones. Fran sent Bill Irish presents and he sent her American gifts, chocolates and poems. Their love for one another blossomed as they continued their long-distance relationship until Fran moved to the States. 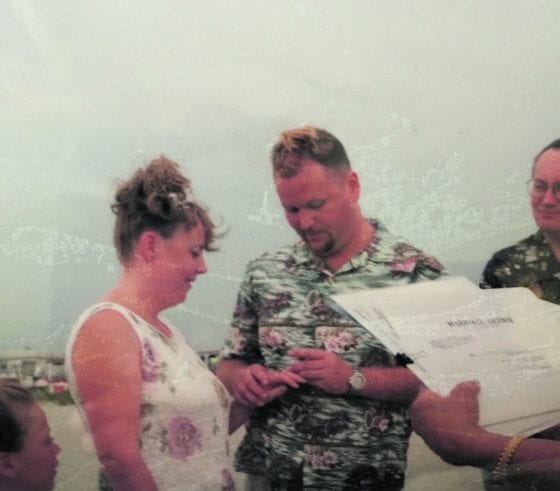 Speaking on how they met, Fran told Dublin Gazette: “Bill was an AK, an aviation store keeper on the aircraft carrier that visited Ireland in July 1996.

“Bill and I met at Traders Wharf a quaint pub on Patrick St Dun Laoghaire, on the eve of his ship pulling out and heading back to sea for the remainder of his 3-month Norlant Cruise.

“He promised he would write me. Sure enough, I was thrilled when I received his first letter and he told me that he wanted to take me to Disney World in Florida.”

Fran moved to the USA and the young couple in love married four years later on July 1st.

Fran has fond memories of living in South Dublin and remembers shopping in Dun Laoghaire on weekends. She said Ireland will always hold a place in her heart: “I guess what I miss about Ireland is the vibrant colours of Ireland’s landscapes, the smiles, quick conversations that are easily stricken up even amongst strangers, the music and craic at the local pub, in our case McCormick’s. And [I miss] my family of course.

“Ireland will always be in my heart. You can take the girl out of Ireland, but you can never take Ireland out of the girl,” said Fran.

Fran told us she had always dreamed of America. She said: “As a child I would wonder what was on the other end of that big ocean over the horizon. I would dream that maybe one day I would get a chance to see for myself. America has given me tremendous opportunities.”

Bill told Dublin Gazette he is very thankful he came to Dun Laoghaire all those years ago and met his beautiful wife.

Recalling his trip to Ireland, he said: “I remember seeing the rock band the Eagles in concert that week at the RDS outdoors.

“What a week in Ireland and what an amazing woman I found that evening at Traders Wharf on Patrick Street. Franny Fay changed my life forever.”

Fran is a school teacher in the USA. Fran and Bill have just moved to a new home in Florida, 20 minutes away from Walt Disney World.

Dog of the Week: Meet Ace

Felled trees and an illegal fly-tip, a “neglected”...

DLR could be first council to ban sale...

New lifts to be installed in Dart stations...

28/02/2019
We use cookies to ensure that we give you the best experience on our website. If you continue to use this site we will assume that you are happy with it.Ok