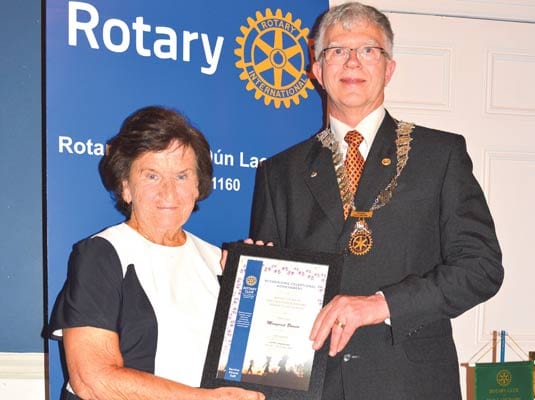 LOCAL woman Margaret Brown was named Dun Laoghaire-Rathdown Person of the Year at the Dun Laoghaire Rotary Club awards last Saturday, where a gala dinner was held at the National Yacht Cub to honour club members for their tireless humanitarian work.

Margaret was recognised for her work across the past 30 years providing Christmas dinners for people who live alone.

She says she hasn’t had her own Christmas dinner in the decades since she began the Dun Laoghaire Christmas Day Lunch Association.

Speaking to The Gazette, Margaret said: “I’m very honoured and grateful to be nominated. I founded the first Christmas lunch in 1986 for people living alone, who are lonely on Christmas Day.

“It’s heartbreaking that they would be on their own otherwise.

“I want to dedicate the award to all those who are no longer with us.”

The Dun Laoghaire native is also well-known for her work with The Forgotten Irish in the UK, helping the now elderly generation of Irish migrants who went to work there in the 1950s, some of whom have fallen on hard times.

The other nominees recognised on the night included Alan McElwee, founder of Serve the City Ireland, a charity that serves the practical needs of marginalised and vulnerable people.

Alan told The Gazette that his nomination for the award was a great recognition of the work that his charity does.

He said: “I’m very humbled to be nominated in recognition of the thousands of volunteers and the work they’ve put in.

“We try to mobilise volunteers to help people that are vulnerable in very practical ways.

“There’re a lot of people that are really in need within the community – a real cohort of people who need just simple, practical help within their home.

“They may not have family and friends who are available to help them, so we try to fulfil this need.”

Denise’s daughter, Fionadha, has Down Syndrome, which led Denise to become involved in the club.

On finding out she was nominated for the award, Denise said she was “speechless”.

She said: “I couldn’t believe it – it’s a great honour! I volunteer and I get involved because it’s just so enriching to work with the athletes. Just to be even nominated in itself is so great.”

A world expert in ophthalmology, Dr Kate Coleman, was recognised for her work fighting blindness, but was not in attendance on the night.

She was honoured for her not-for-profit organisation, Right to Sight, which works towards ending needless blindness through empowering international experts in glaucoma research and eye surgeon training.

Gerry Ryan, of the Living Well with Dementia Project, was also honoured at the event.

The project is a community-based initiative to support people with dementia to continue to live at home and be an active part of the community.

Speaking to The Gazette, Gerry said he was surprised to find out he had been nominated. He said: “I’m only nominated on behalf of all the volunteers, so I accept it on behalf of all of them. It’s a group effort.

“This gives an extra boost to help create awareness around dementia.”