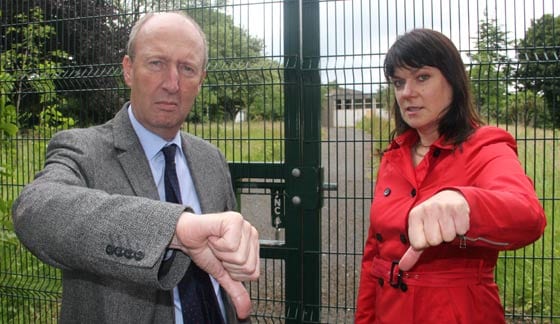 MOUNT MERRION locals say they are “flabbergasted” as controversial Oatlands plans have been given the go-ahead.
Having been previously rejected by DLRCC, An Bord Pleanla granted permission for the proposal to build 63 residential units, including two four-storey blocks of apartments, on a site which was part of the Oatlands school and monastery grounds.
Developers Balark Investments have also purchased a house in Cherrygarth, which they plan to demolish and use as an entrance to the development.
The Inspector’s Report from the Bord stated: “Having regard to the zoning objective for the sites, I am satisfied that the principle of developing residential units at this location is acceptable.”
However, locals vehemently disagree with the approval.
Tom Fahey, of the Mount Merrion Residents’ Association, said: “The inexplicable has happened.”
Of the plans, he told The Gazette: “Can you try to imagine the thousands of major trucks journeys this will involve on local roads designed for light traffic?”
The plan involves raising the level of the site by two to three metres and the installation of a new sewage and foul water drain through Cherrygarth, involving excavating a trench up to 6 metres deep.
Fahey added: “Can you imagine the damaged roads and the probability of gardens on Lower Trees Road being occasionally flooded?”
A number of local politicians also expressed their disappointment at the approval of the plans.
Cllr Deirdre Donnelly (Ind) said: “I feel that the residents in the area have been very let down.
“There are a number of problems with this site. A house will be demolished on a cul-de-sac to make way for the entrance.
“I am also concerned that another planning application has been lodged with an entrance onto Cherrygarth on the grounds of Thornhill House.
“The infrastructure isn’t there to cope with this additional traffic. I am not opposed to new developments in Dun Laoghaire-Rathdown, but feel that this kind of proposal is unwarranted.”
Minister for Transport Shane Ross, who had objected to this development since it was initially proposed, said that “housing is not just about bricks and mortar”.
He said: “It’s also about infrastructure – schools, roads, sewage, preventions against flooding, healthcare, social amenities … Consideration of all the above contributes to a decent quality of life for communities.
“Although I very much recognise the ever-pressing need for increasing the number of available housing units in Dublin-Rathdown and the greater Dublin region as a whole, I do not support the development of 63 residential units on the Oatlands Monastery site.
“Last October, I objected to this proposal on grounds of preservation of local heritage, school and medical services provisions, density and height concerns. These objections still stand.”
Deputy Josepha Madigan (FG) said that she believes the proposed development will “adversely affect the character and heritage of the Mount Merrion/Cherrygarth area, and pose an undue strain on local infrastructure”.

Harbours to go back to public ownership