Locals asked to help give Gaza kids a terrific trip

MORE than 20 young teenagers from Gaza in Palestine are heading to Ballybrack this Sunday, July 30, for a football match and family fun day.
This is the second year running that the teenagers from Al Helal FC, aged 13-15, will visit Ballybrack FC as part of a ten-day tour of Ireland with the support of Gaza Action Ireland.
Last year’s event saw a huge local turnout and organisers are hoping for the same support again this year to show the solidarity for Palestine felt here in Dublin.
Speaking before the event, organiser with Gaza Action Ireland and local PBP councillor Hugh Lewis said: “These kids had a brilliant day in Ballybrack last year and we want to make sure they get an even bigger welcome this time.
“It is appropriate that so many young Palestinian footballers should make the trip, as over half of Gaza’s 1.2 million population are under the age of 18 and, as such, bear the brunt of Israeli oppression.” 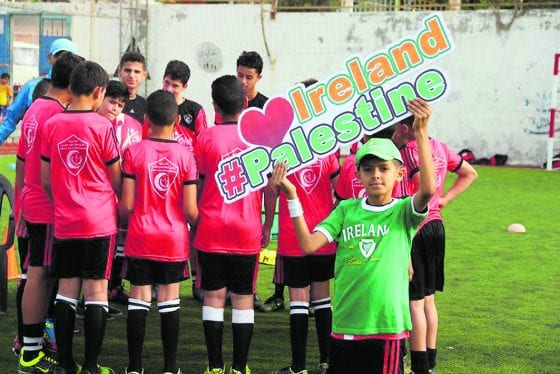 Cllr Lewis said that the recent escalation of violence in occupied Palestine makes this a trip an enormous and welcome break for the kids.
Their club, Al Helal FC, is located between two refugee camps where poverty and destruction is rampant, and the children generally can’t travel beyond the narrow strip of land between the sea, Israel and Egypt.
Cllr Lewis added: “The event on Sunday is an opportunity for these children to meet kids their own age in Ballybrack and to build lifelong friendships.
“On a previous trip [to Gaza], I visited Al Helal FC and saw for myself the reality and hardship caused by the blockade.
“Come along on Sunday and make sure we give a hearty welcome for these talented young Palestinian footballers. The event begins at 1pm, so get there as early as possible.”

Council rolls out a new strategy for bike use

Burglar got a haircut – then broke into house next door

Family go the distance in memory of Ballinteer...

South Dublin seeking to become one of Ireland’s...

Tributes have been paid to a south Dublin...

Monkstown actor stars in her own play in...