A talented artist from Glencullen has painted a picture of one of his sporting heroes and is getting the chance to meet him.

Andre Mooney’s popular art burst onto the scene in the last year.

He has already met the likes of Johnny Sexton, Gerry Adams, Denis Irwin, Dublin GAA players and recently Mo Salah to show them his paintings and get them signed. 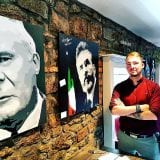 Andre (30) told Dublin Gazette how he got into painting: “I used to work in retail and I would always be doodling on receipts. I’d draw little pictures and people would say ‘I’m going to keep that’.

“Then I painted Gene Wilder from Willy Wonka and the Chocolate Factory when he passed away and I put it on Facebook which got a great response and it just took off.

“Now I have loads of orders in so it’s really good.”

Andre’s paintings got even more popular after he painted football players from the Dublin’s GAA senior football team. So far, he has met Dean Rock, Ciaran Kilkenny, Brian Fenton, Diarmuid Connolly and Stephen Cluxton, and Philly McMahon is next on his list to paint.

Andre’s paintings of well-known people and meeting has really taken off in the last year.

“I’m flat out at the minute, everything’s going well. I’ve been doing them now the last year and they just took off.

“I met Mo Salah three weeks ago. He was a cool guy. I got to meet him in the airport when I was invited in. I had a large painting of him done and I have it here now all signed.

“I’m a Man United fan and painted a big Mo Salah, but that’s the job, you have to cater for everyone!

“My favourite was being invited into Leinster House to meet Gerry Adams and get the paint
ing I did of him signed.”

Next on André’s agenda is meeting Paul Scholes. He’ll be meeting with the retired Manchester United player in a couple of weeks to sign his painting.

Andre has also done a lot of painting donations for varies charities like hospices and the Blue Cross.

He was also asked to design his local GAA teams club crest which he said “meant a lot” to him.

To see more of Andre’s work, check out Andre Mooney Art and Design on Facebook.

Traveller housing targets have not been met in 19 years

Interesting times at The Merrion Inn

Garda hit and dragged along by car...